Ridding the world of hangriness since 2019 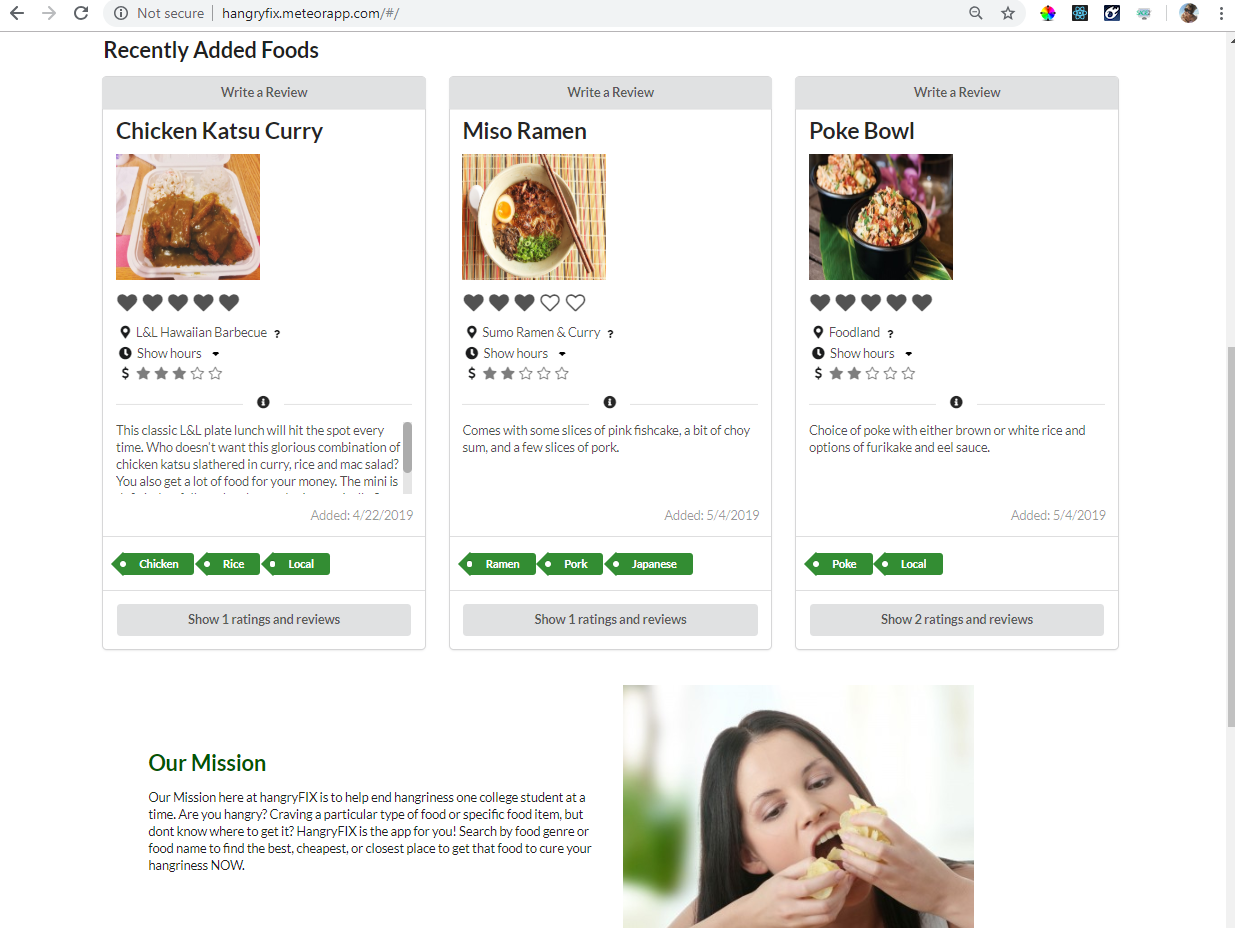 There are many restaurant review sites (i.e. Yelp), but students often crave a specific food item rather than a genre or restaurant.

hangryFIX is a way for UHM students to publicize, rate, and search for specific food items. Ratings will revolve around food items rather than overall restaurant quality, service, etc. 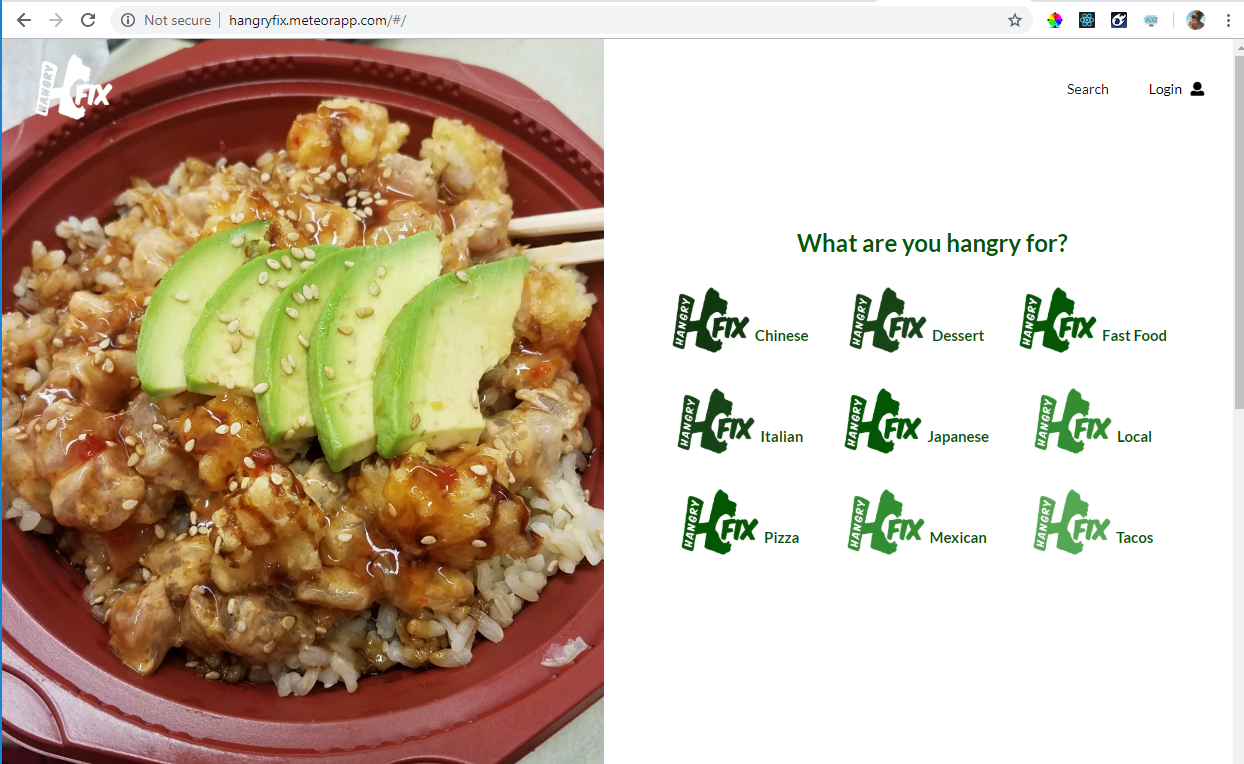 The landing page displays the three most recent food items along with their reviews along the purpose and goal--essentially, to prevent hangryness--of this application. Through the navigation bar, users can log in to their accounts and register for one. Any visitor to the site can start searching for foods from the landing page by clicking on the respective icon for a food category they're currently hangry for. 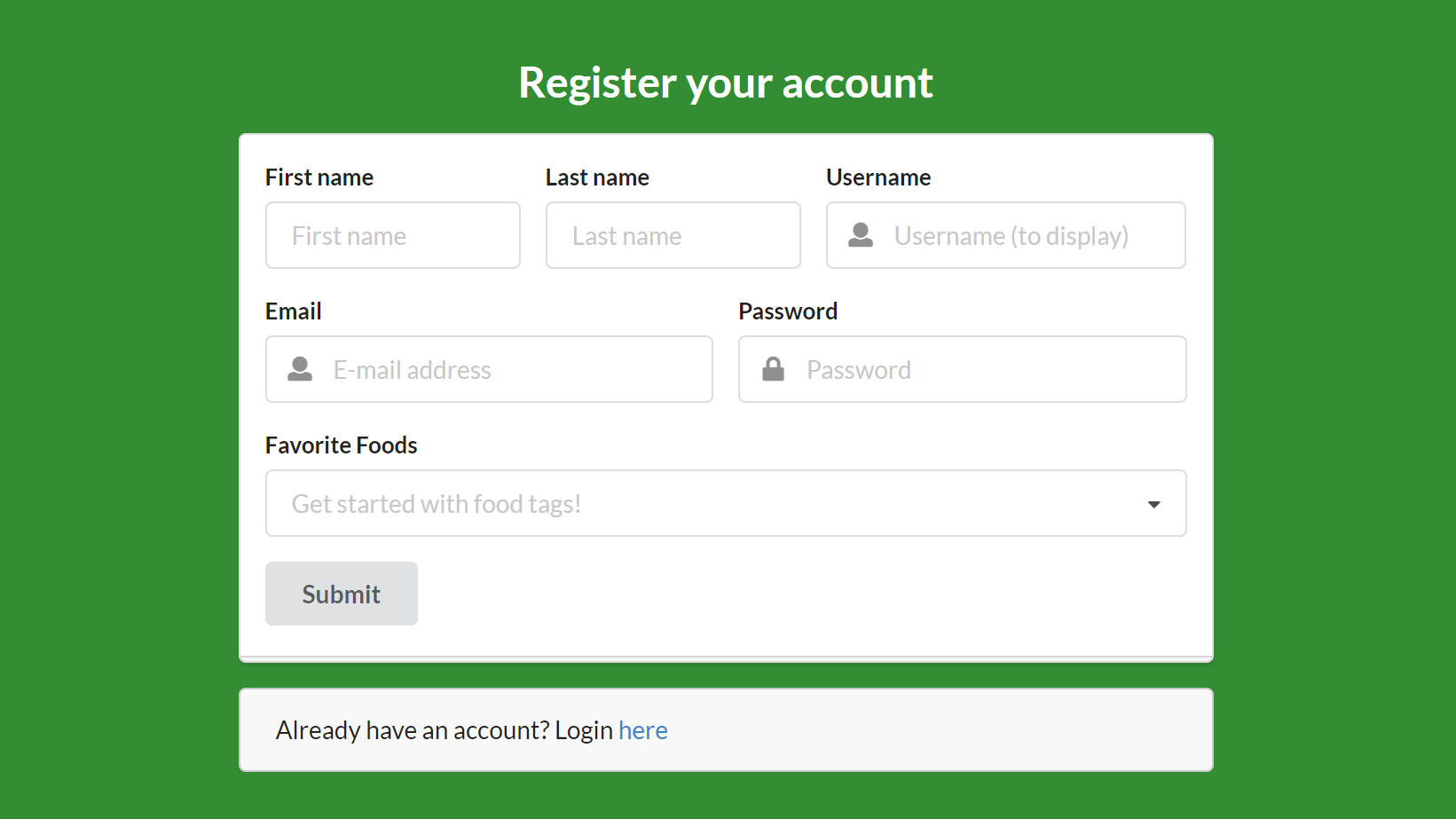 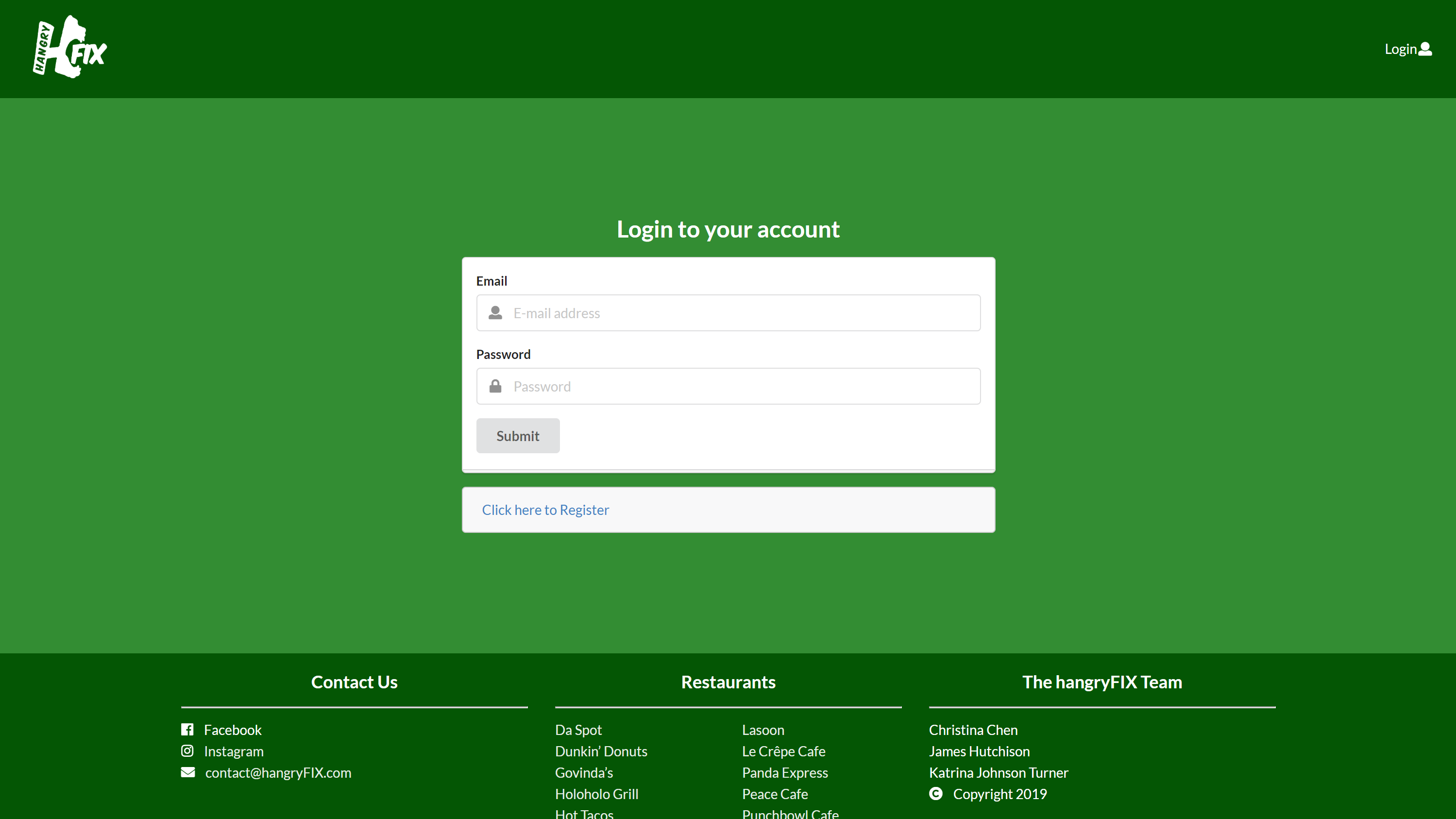 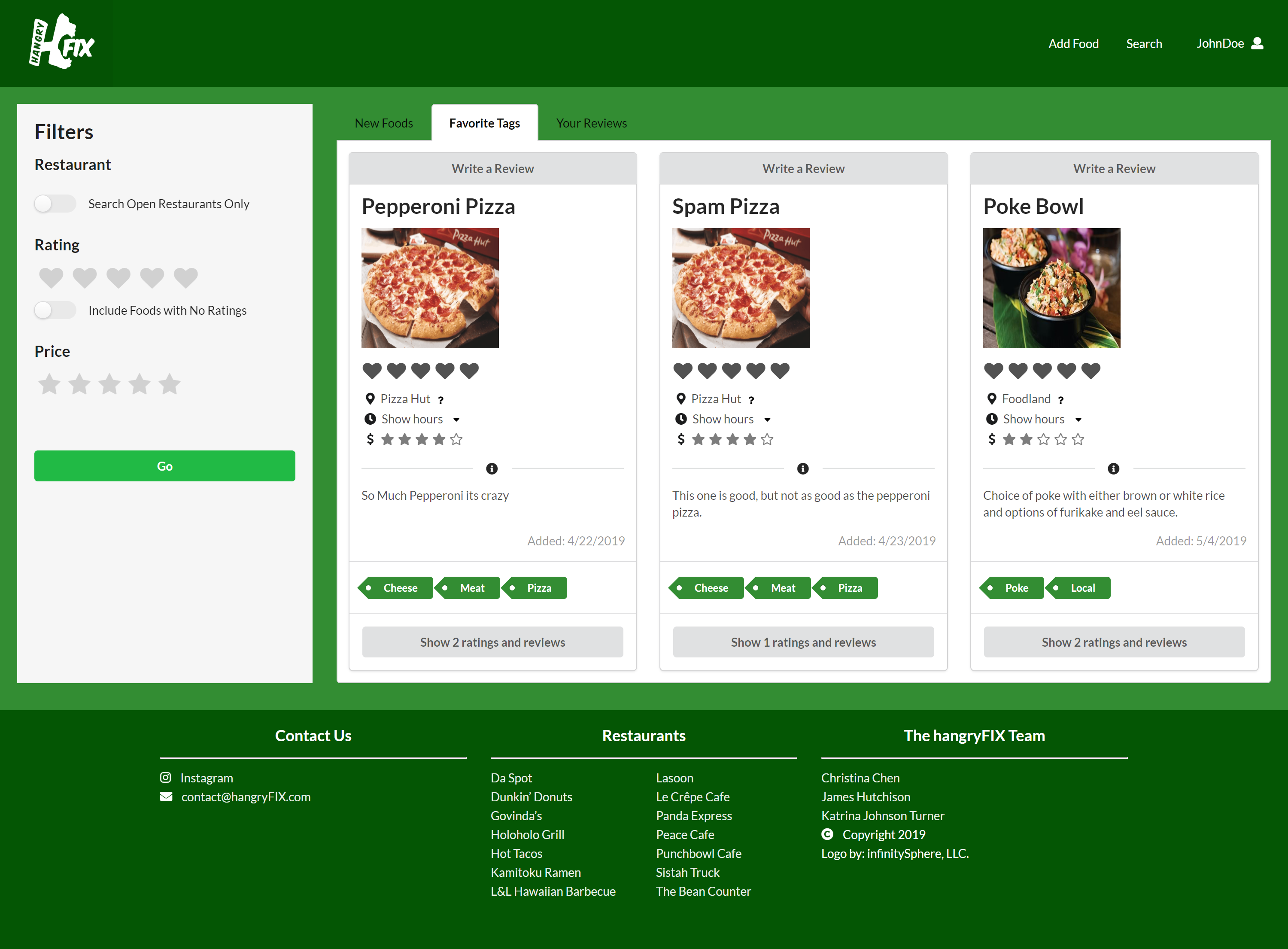 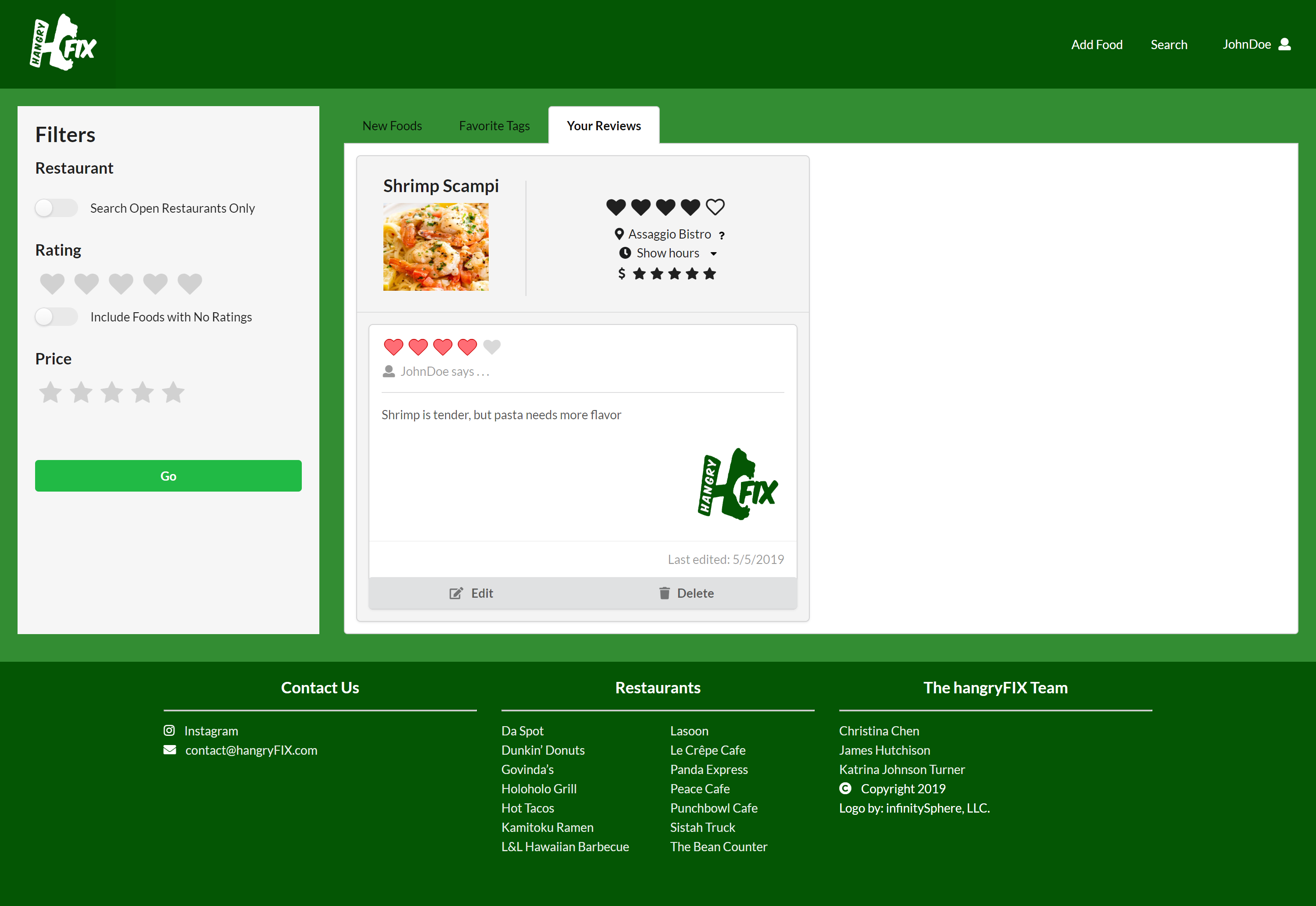 Users have a personalized page with 3 tabs for easy food finding. The first tab shows the 9 newest foods recently added to the hangryFIX site. The second tab shows new foods associated with the tags they "favorited." And the third tab shows them all their previous reviews so they can easily find those foods again and edit their reviews if they need to. 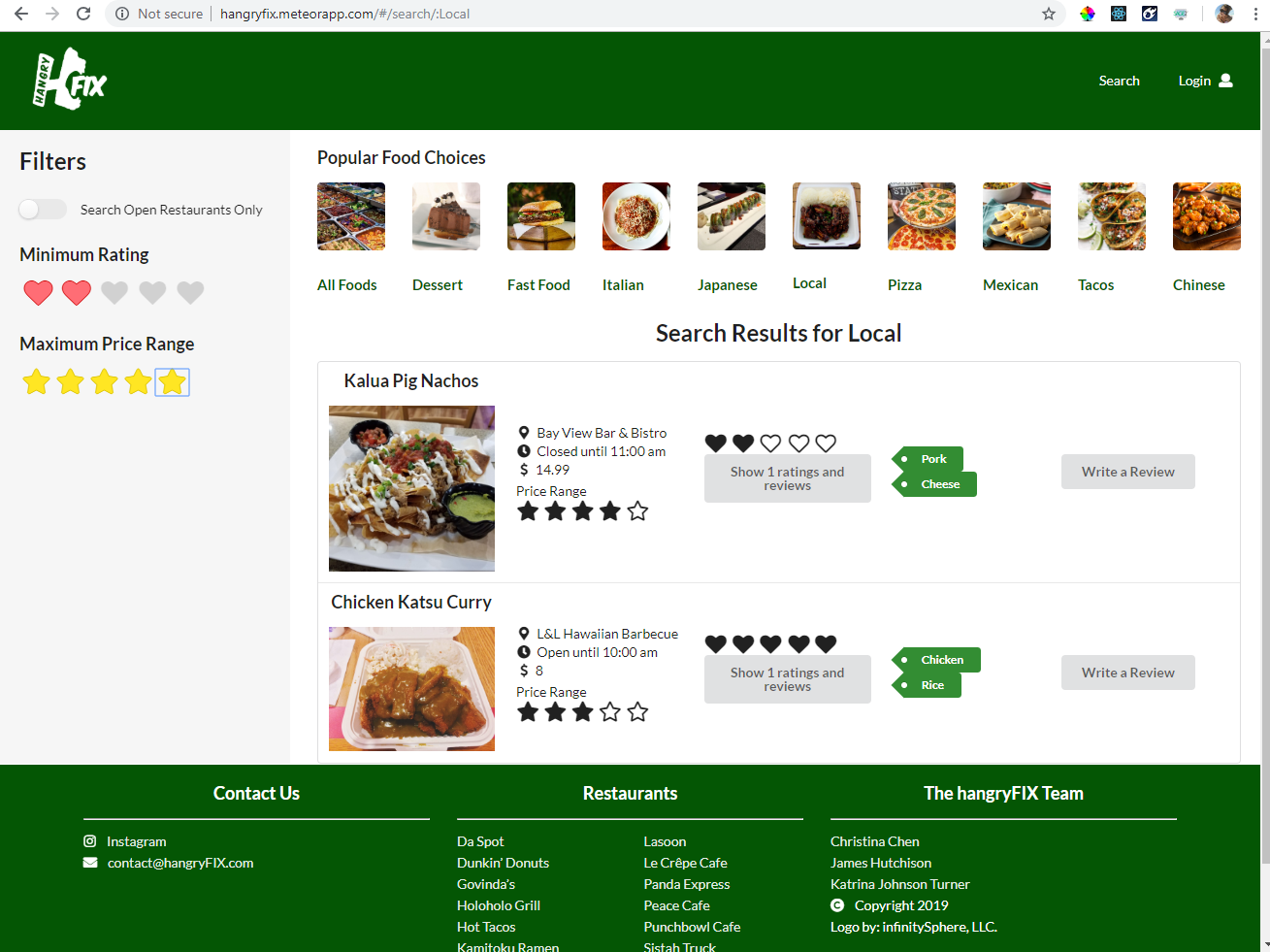 The search page is one of the most important pages in the application. This page is accessible through the icons provided for each food category on the landing page and through the navigation bar. From here, users can find foods that have been added to the app based on their food categories. They can filter foods by what is most important to them with the options of by rating, price range, and currently open restaurants. 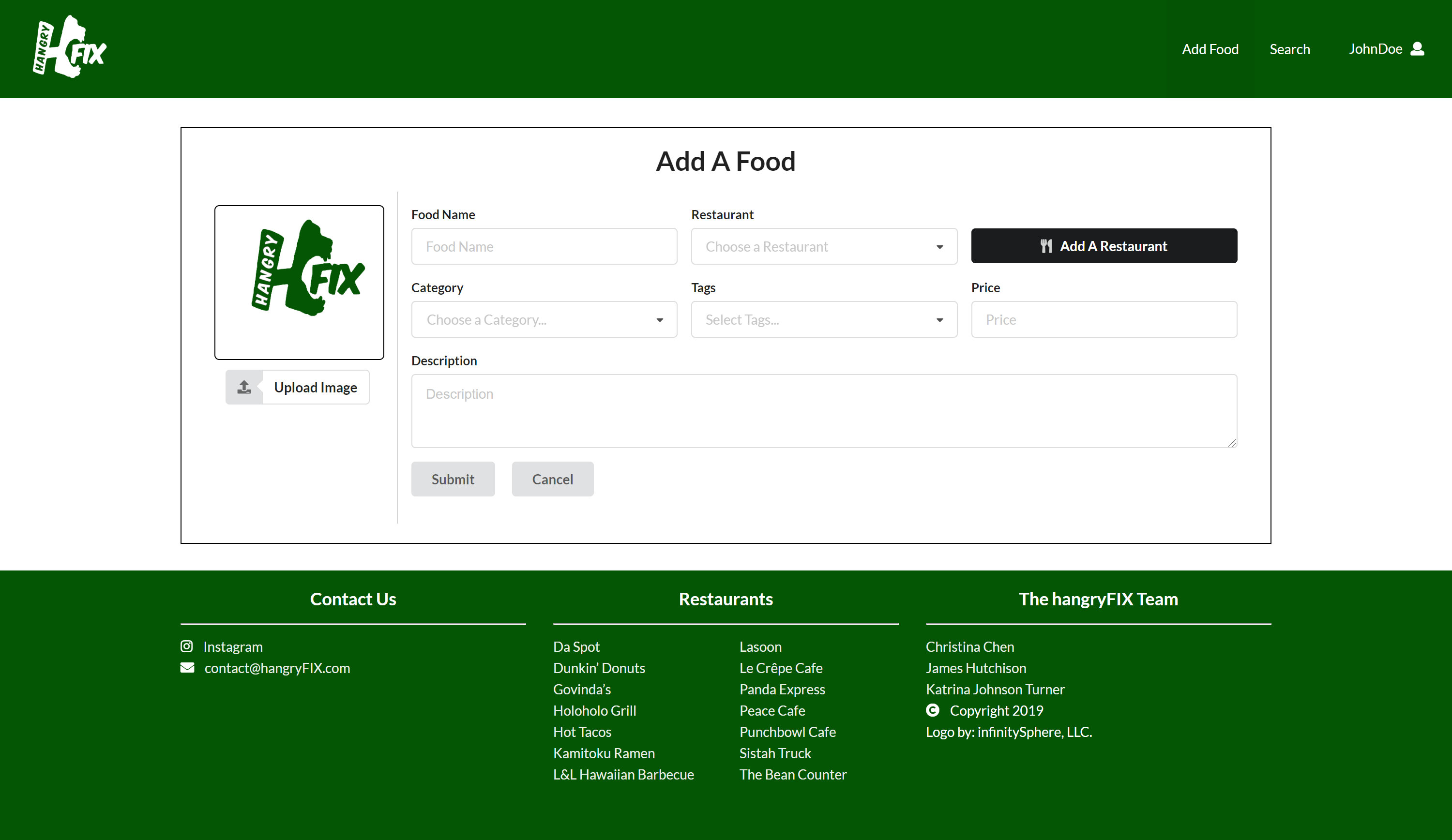 All users with an account can add a new food item to the database. Available information the user can add about that food is name, image by URL, restaurant and its hours, price, and a brief description. If no image URL is provided, the default image of the hangryFIX logo will be featured. Users can also add new restaurants here if they aren't available. In addition, admins are able to view which users added which foods across the site. 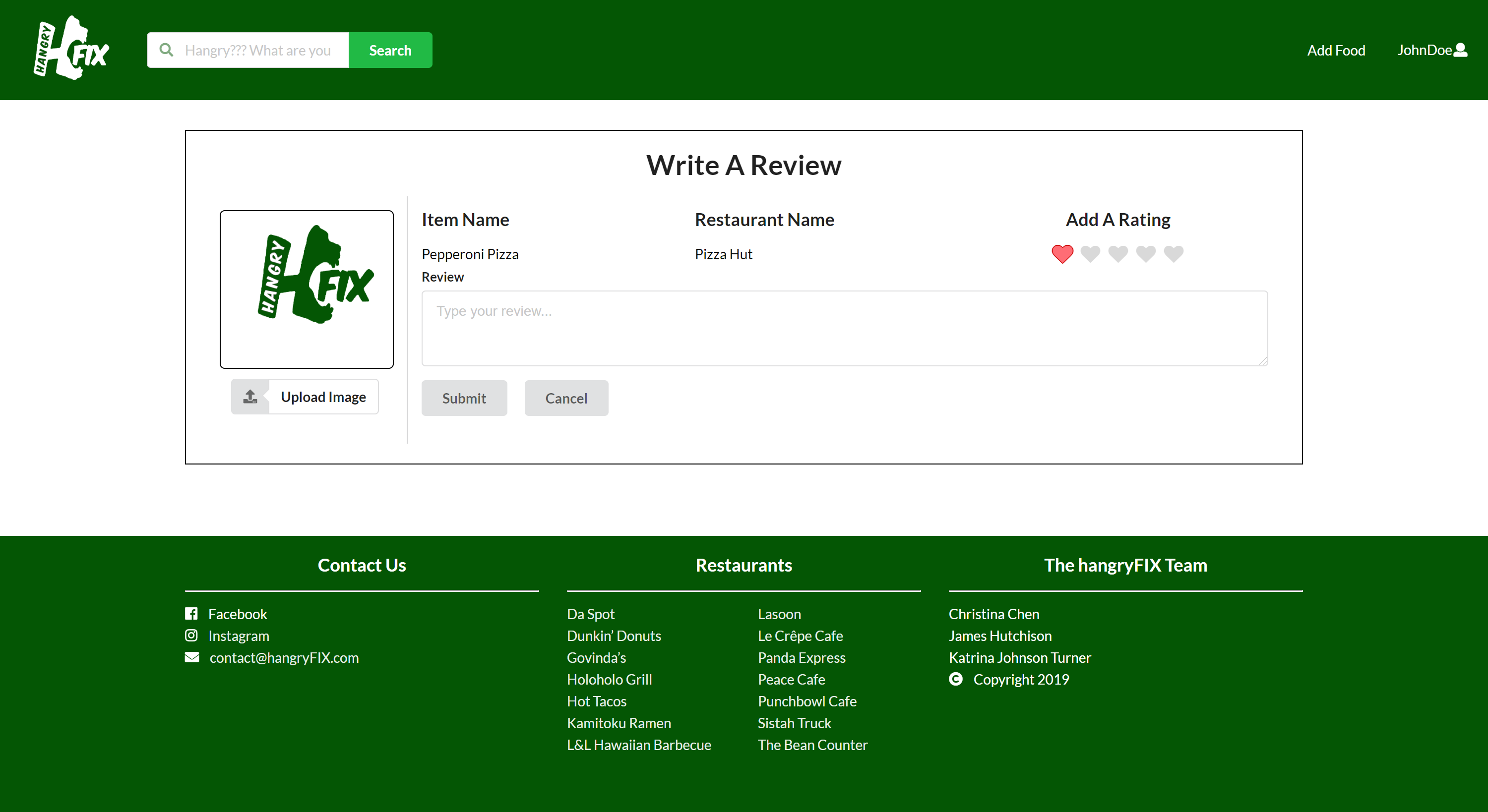 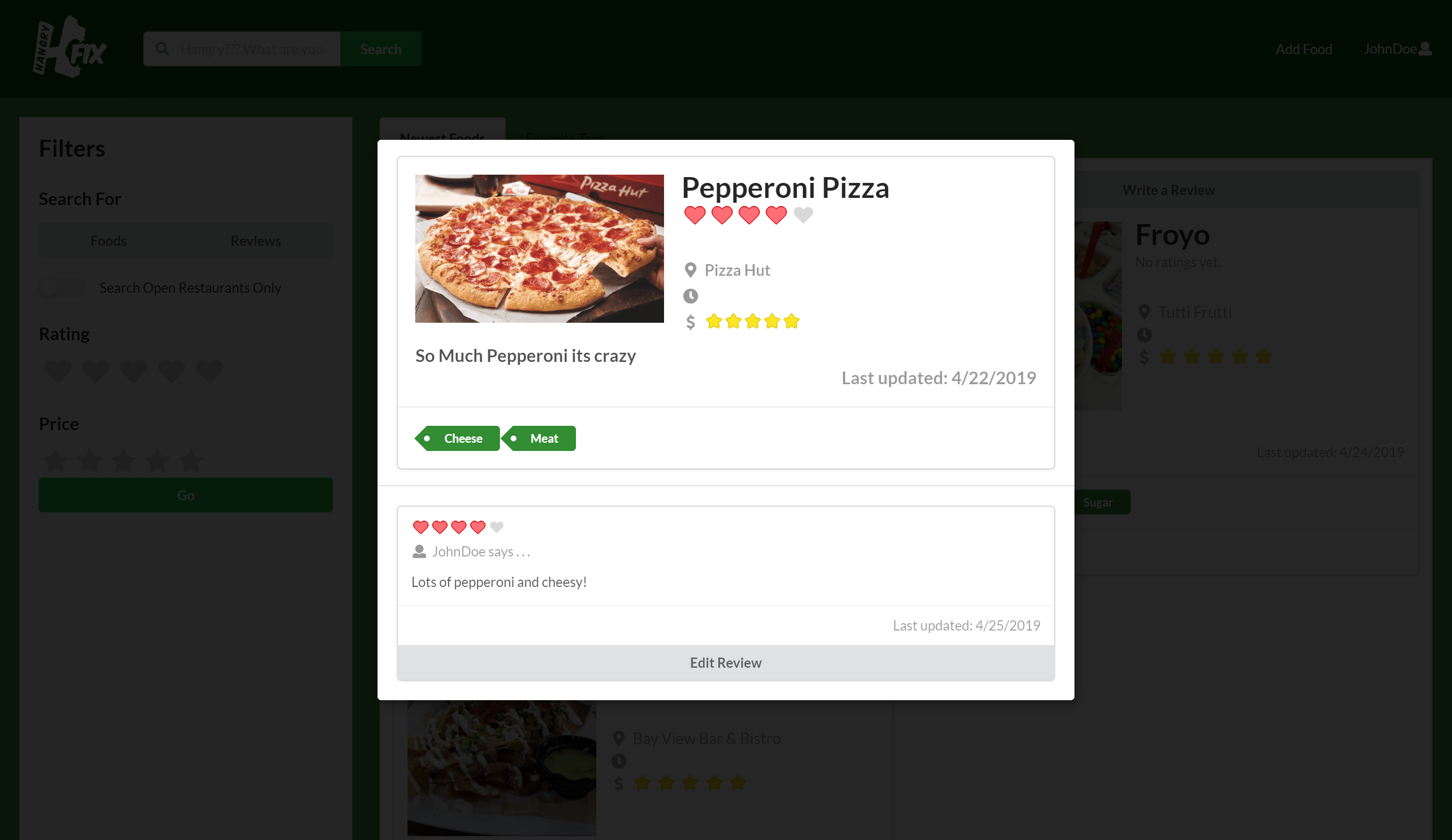 Users can add a review for a food item they have eaten before if that has already been added to the database. (Otherwise they need to first add the food). They can also go back and edit that review at anytime or delete the review. Like when adding foods, 1) if no image URL is provided, the default image of the hangryFIX logo will be featured in the review, and 2) admins are able to view which users wrote which reviews across the site. 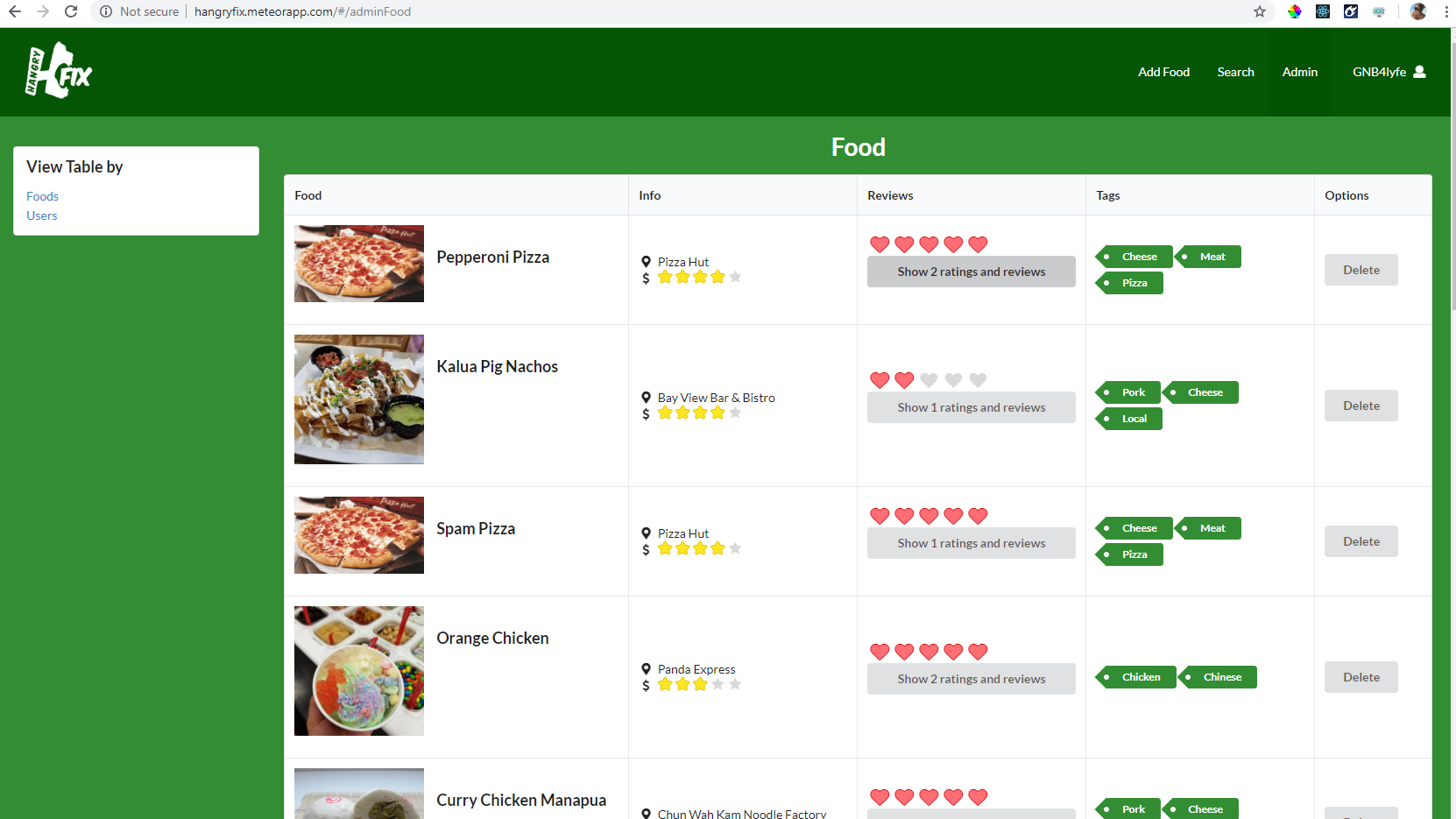 Users with Admin rights are able to view all foods and users. They can delete any foods they deem inappropriate and track what reviews and foods are being added by which users. 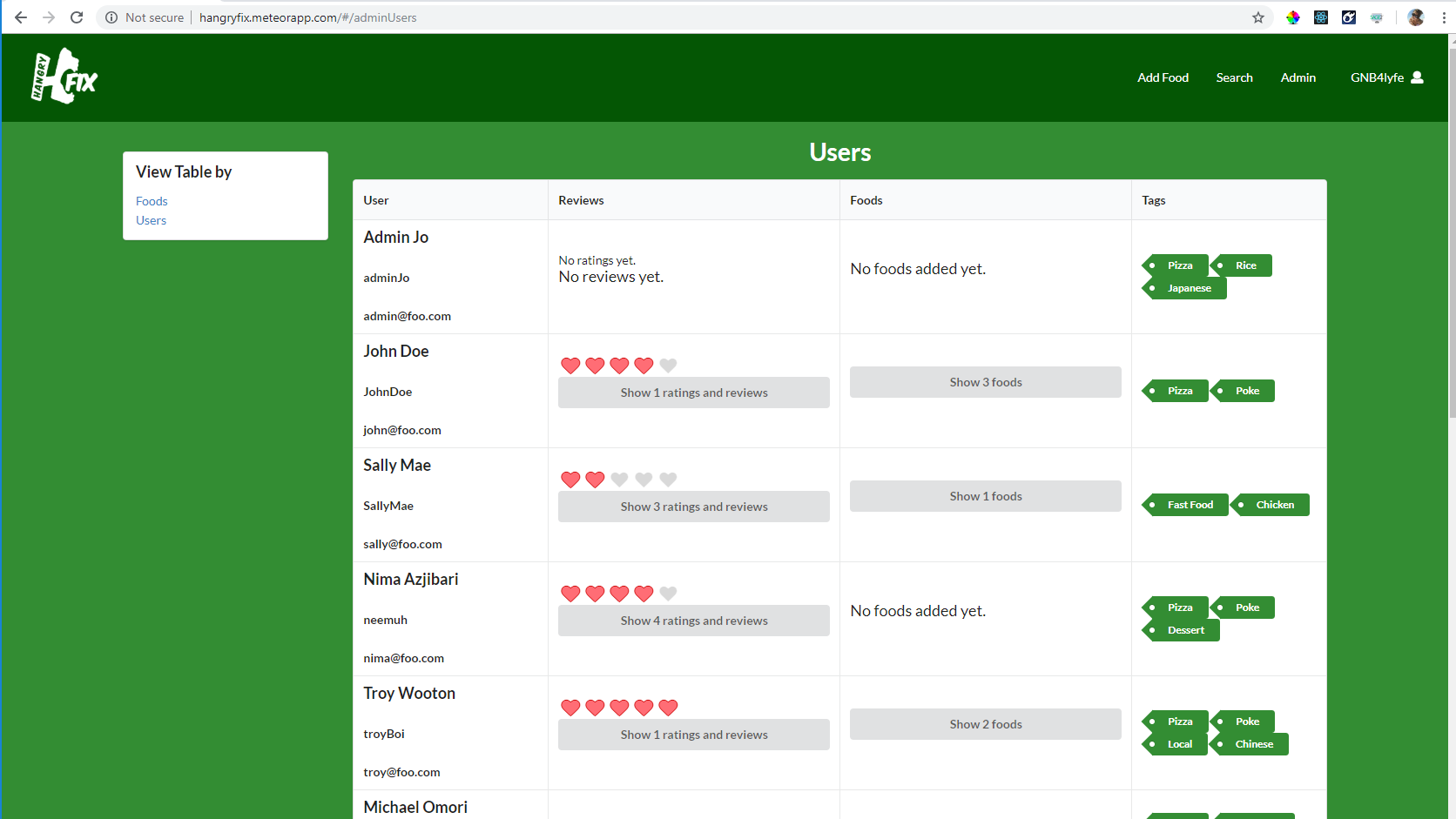 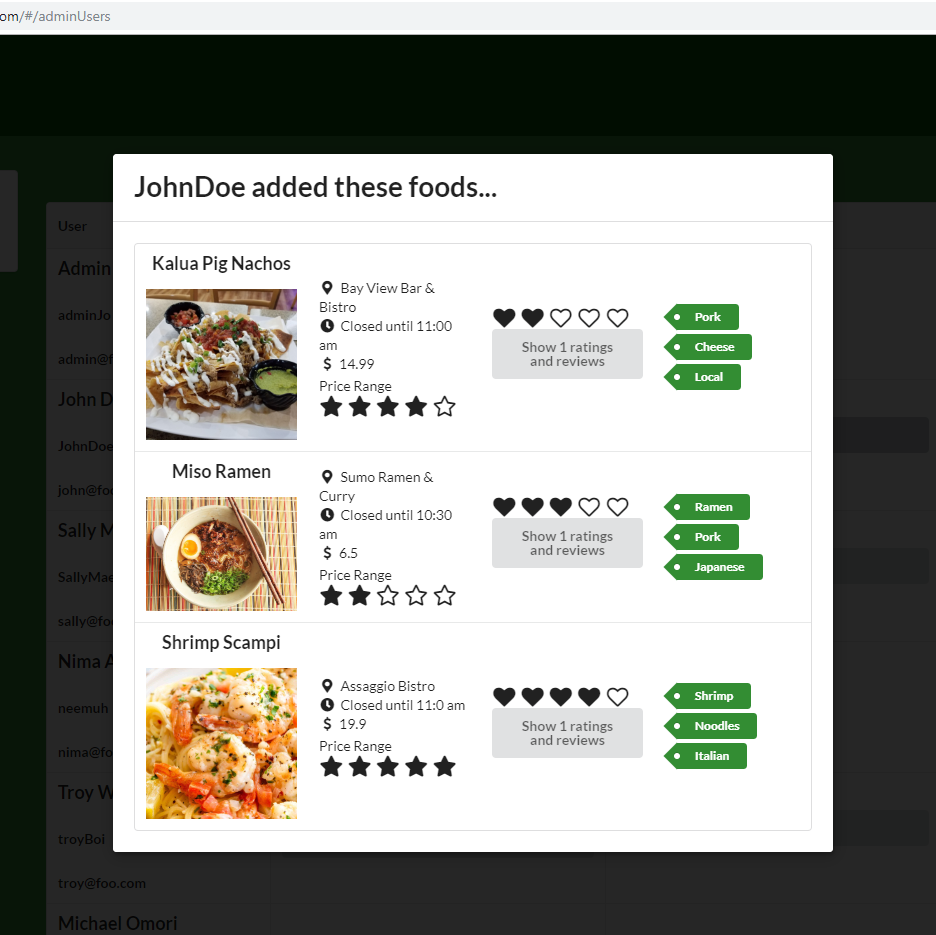 This milestone started on April 5, 2019 and ended on April 11, 2019. The goal of Milestone 1 was to create pencil-and-paper mockups of the pages on hangryFIX. The landing page layout is based on Grubhub's, and a screenshot of their page was used as the mockup. 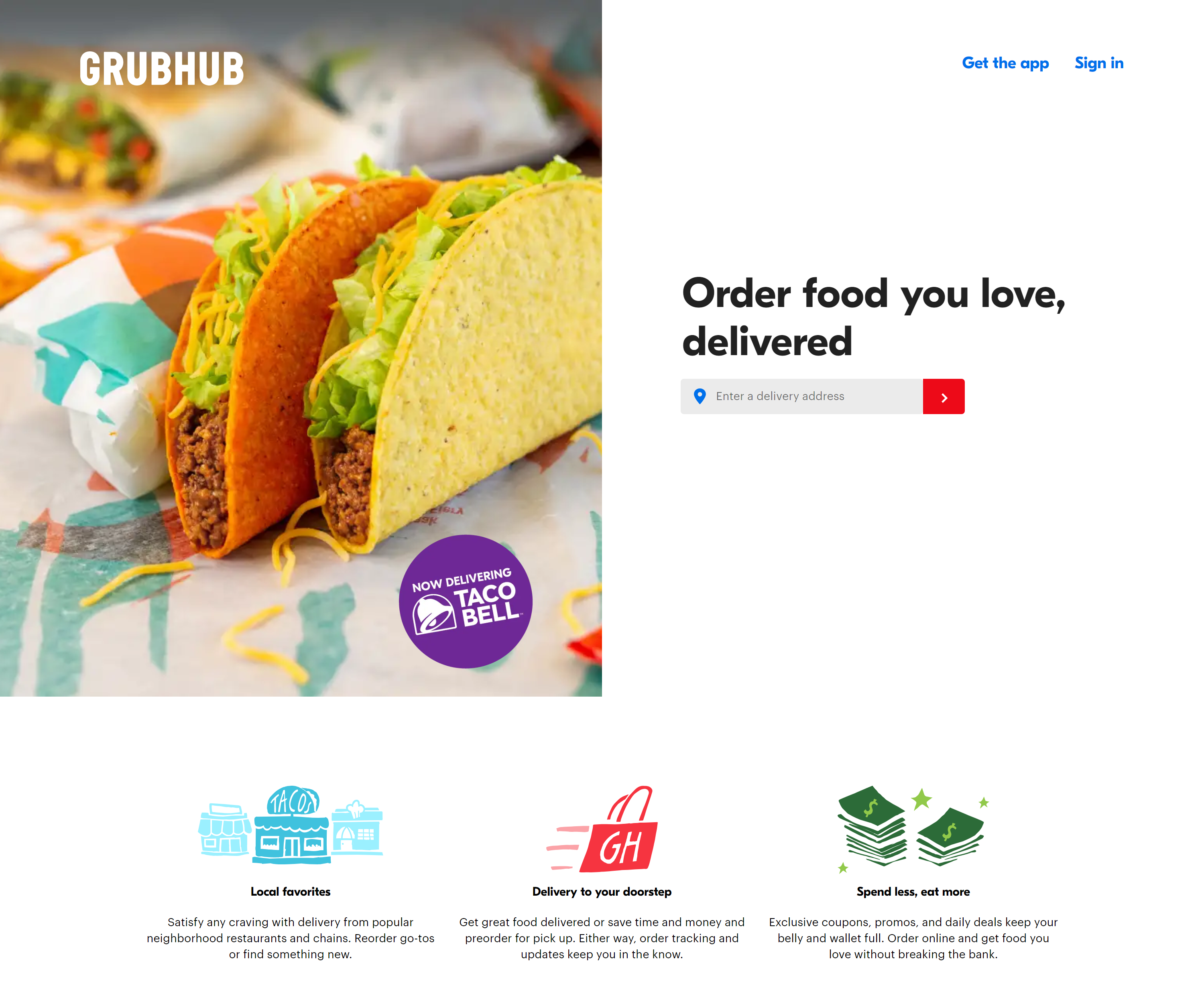 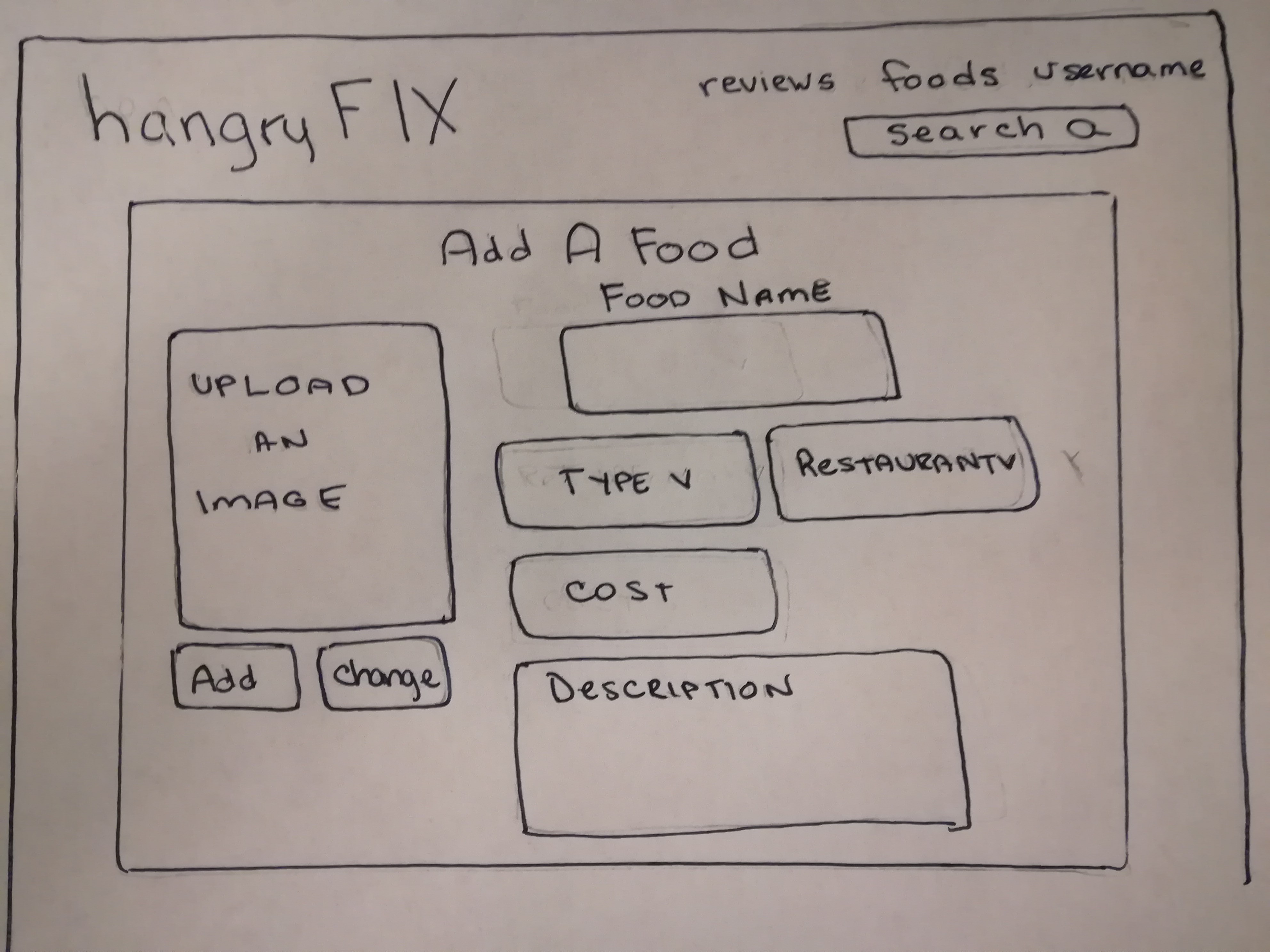 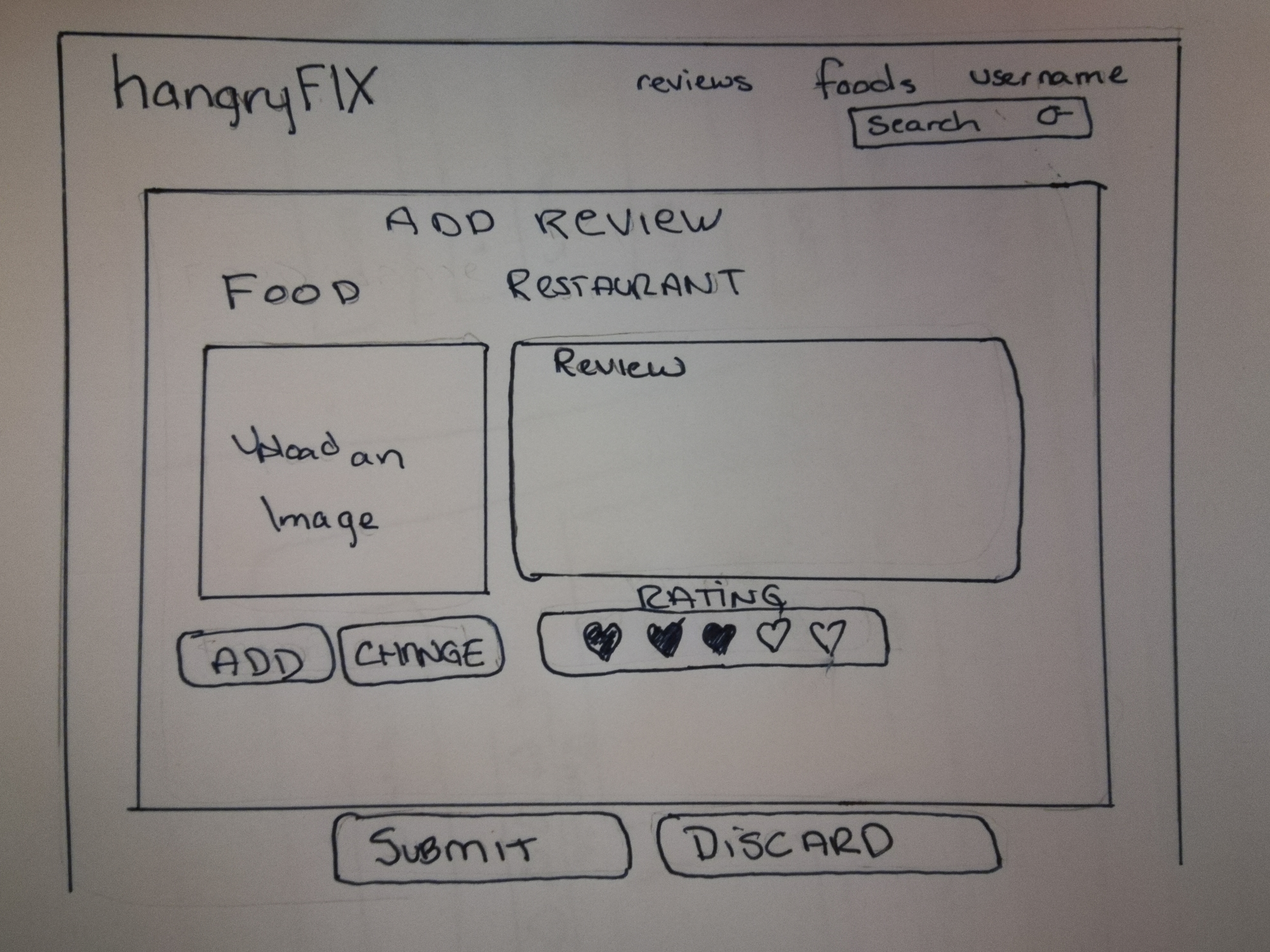 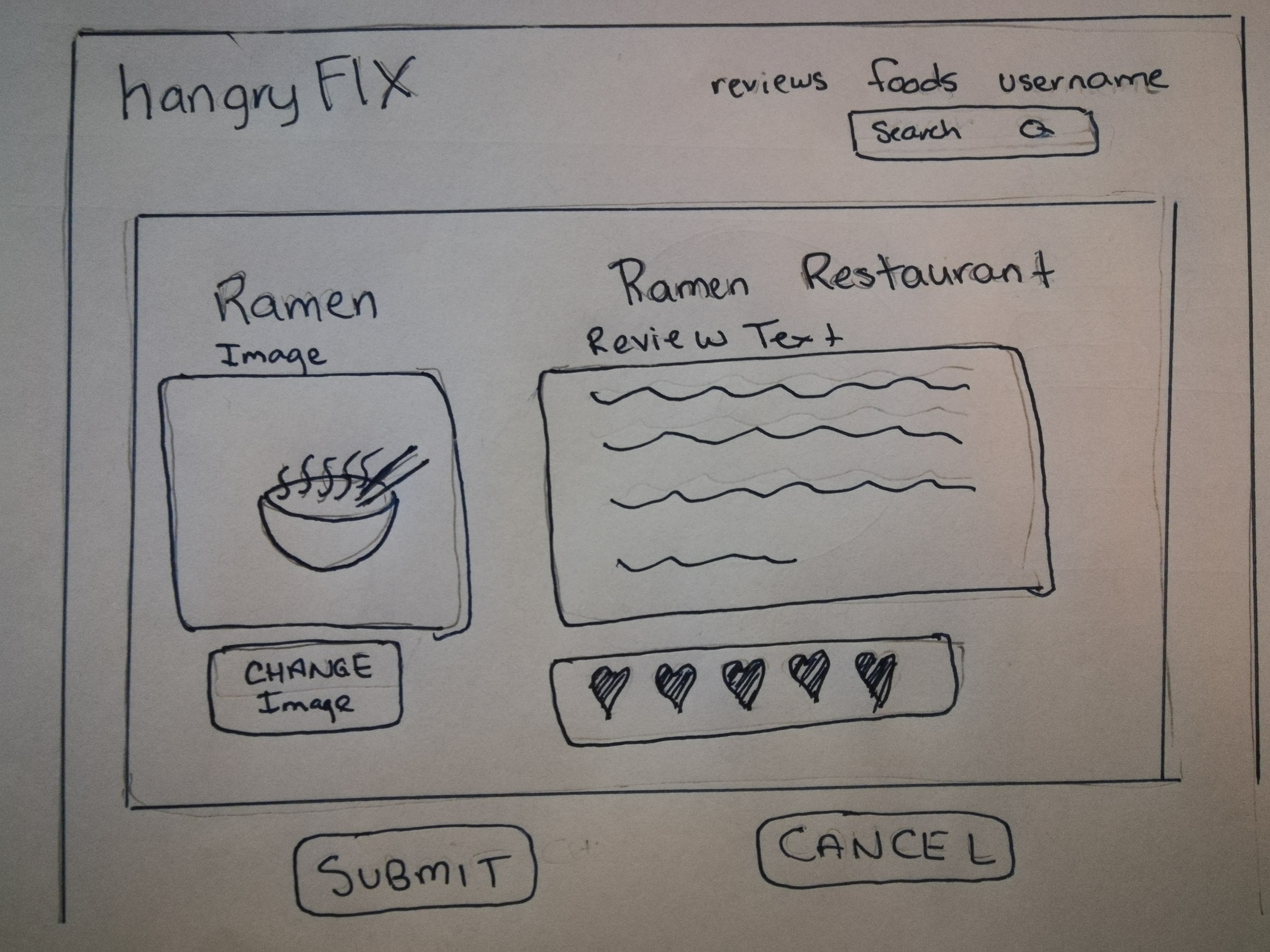 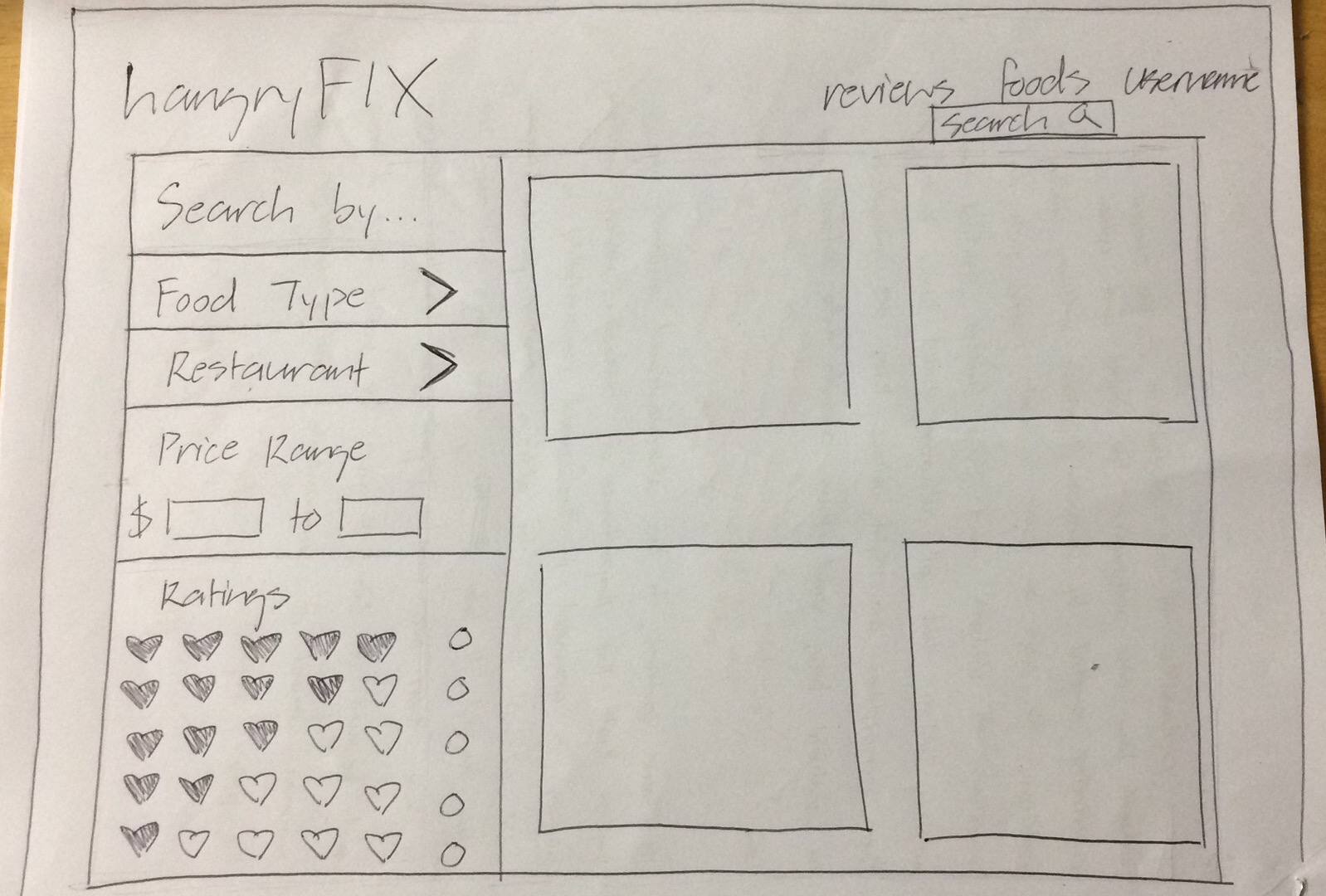 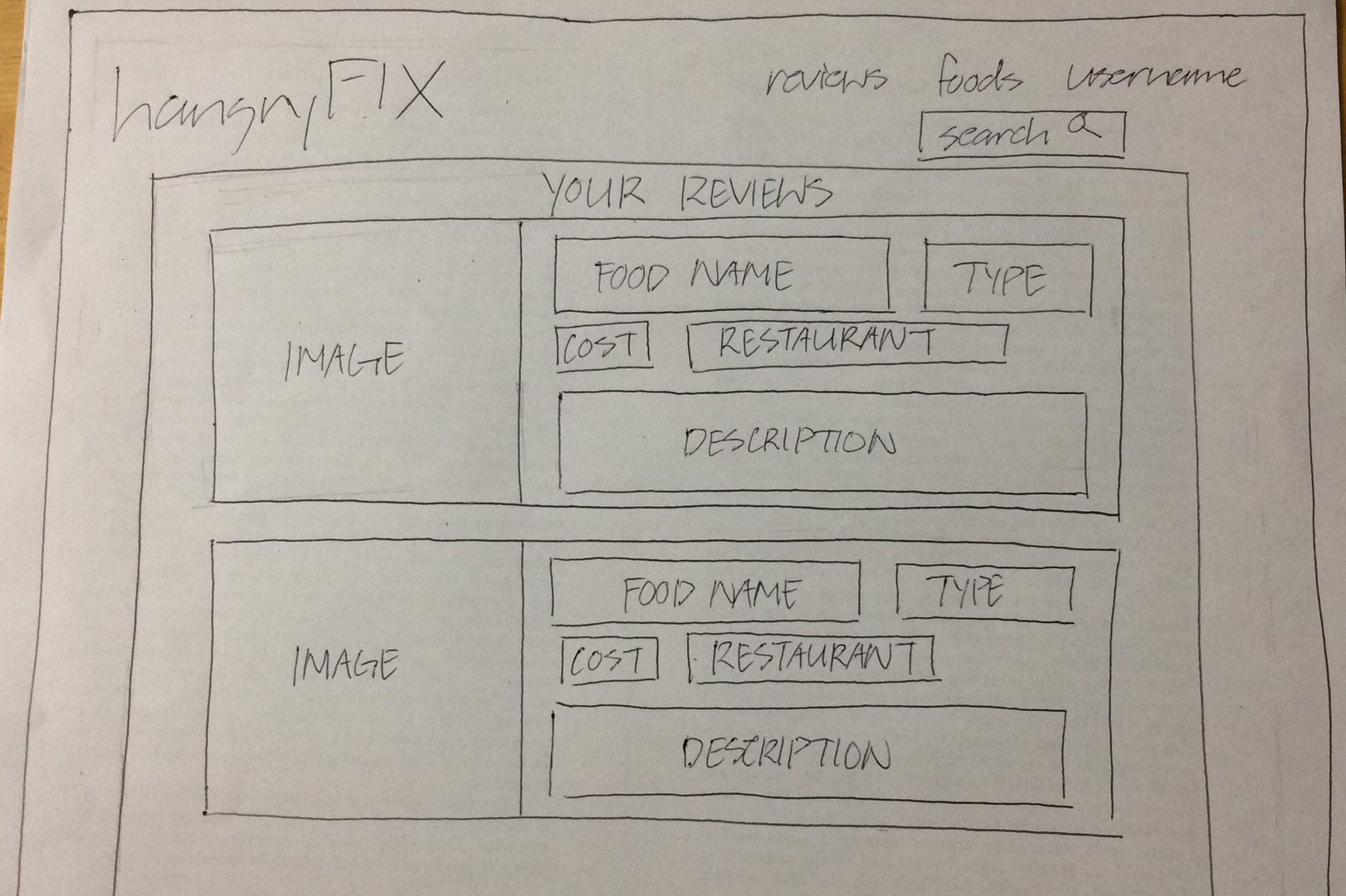 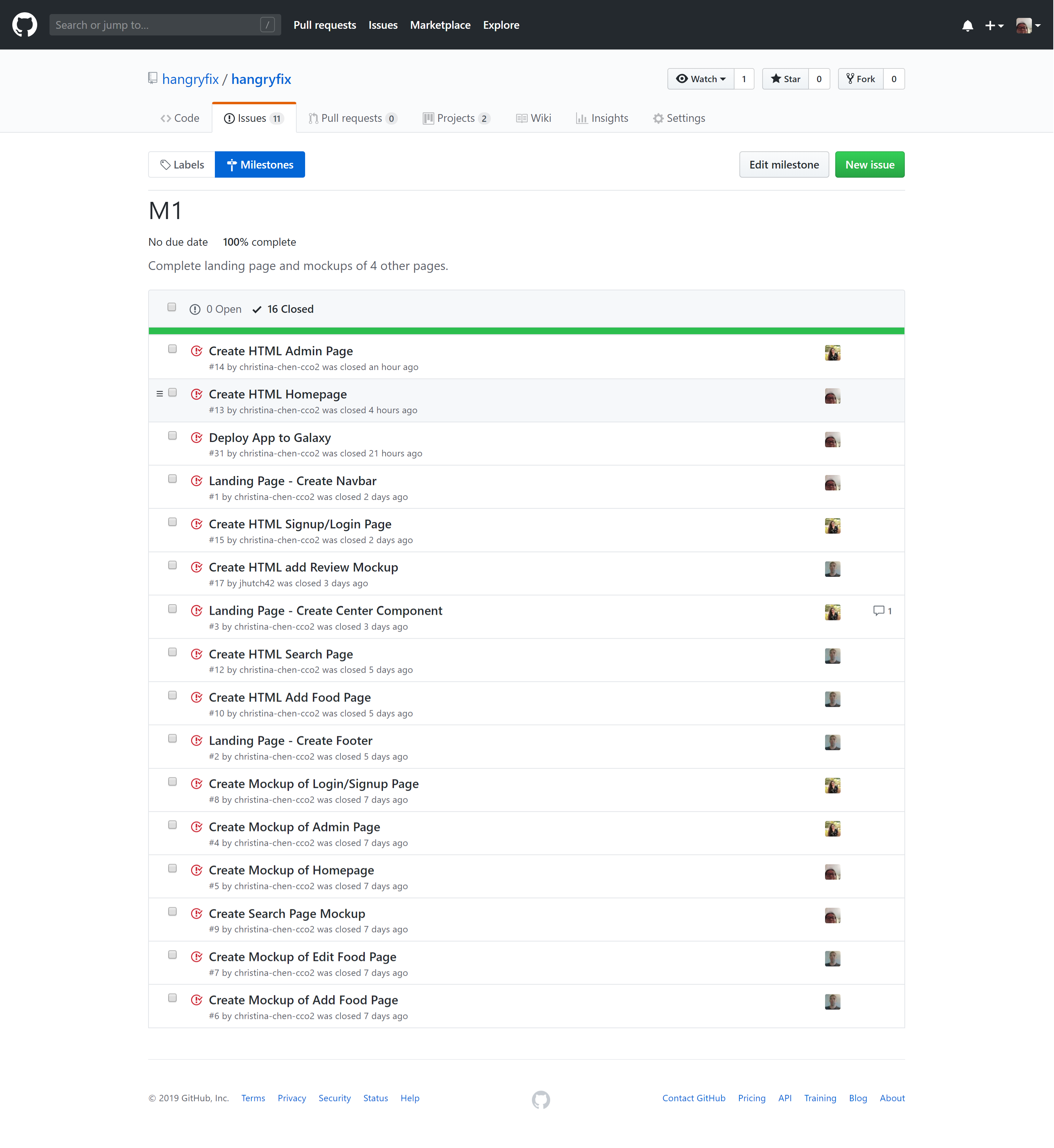 Milestone 1 consisted of 16 issues, each of which were implemented in their own branches that were later merged into the master. Progress was managed via the hangryFIX GitHub Project M1: 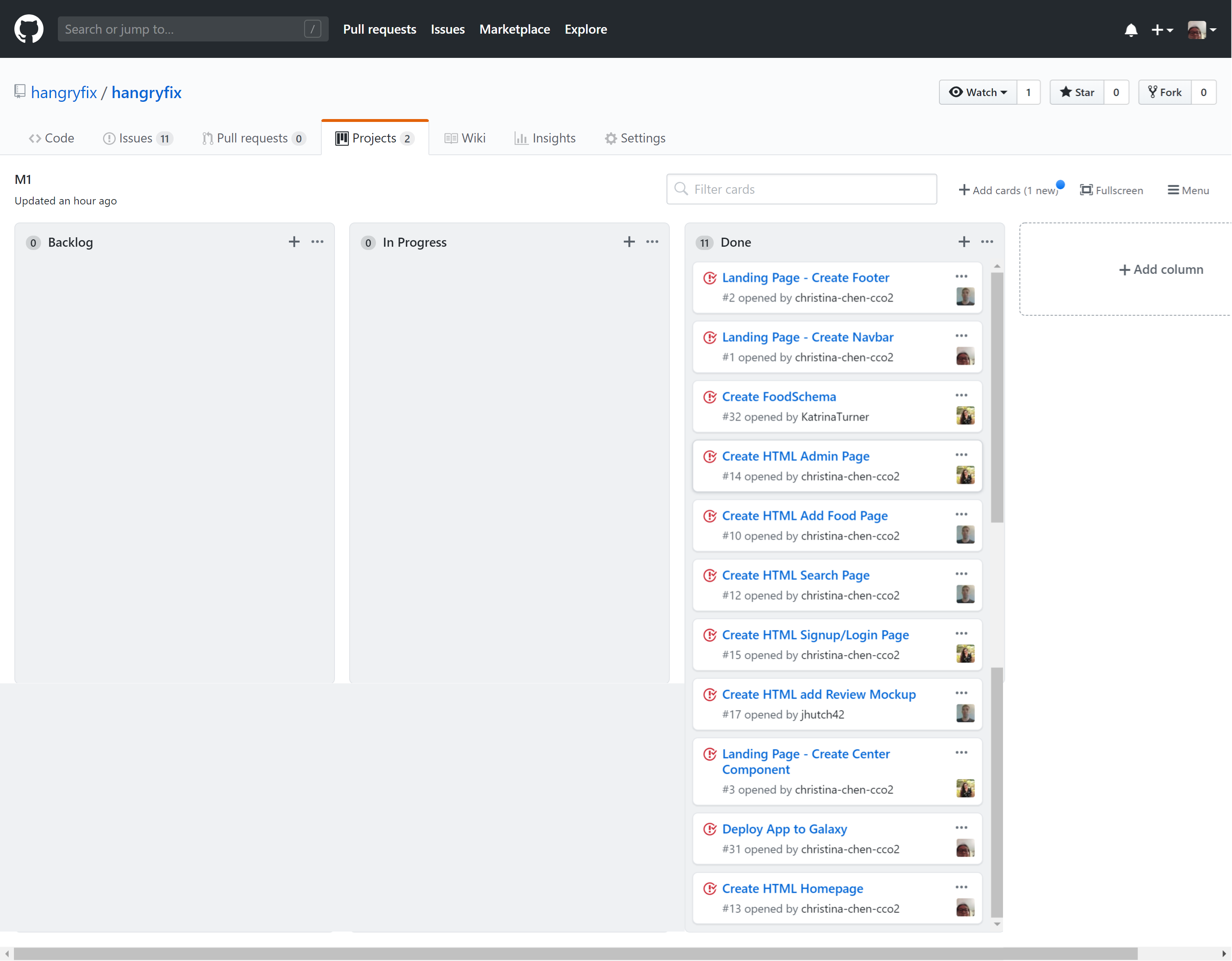 This milestone started on April 18, 2019 and ended on April 25, 2019. The goal of Milestone 2 was to add the first sets of functionality to the pages and components. The major additions and primary focus of this app are the abilities to add, edit, and view reviews and to add and view foods. In addition, nearly all of the MongoDB schemas, such as for foods, users, and reviews, to be used in the app were created in this milestone. Work on creating default data such as foods, restaurants, and user accounts was also started. 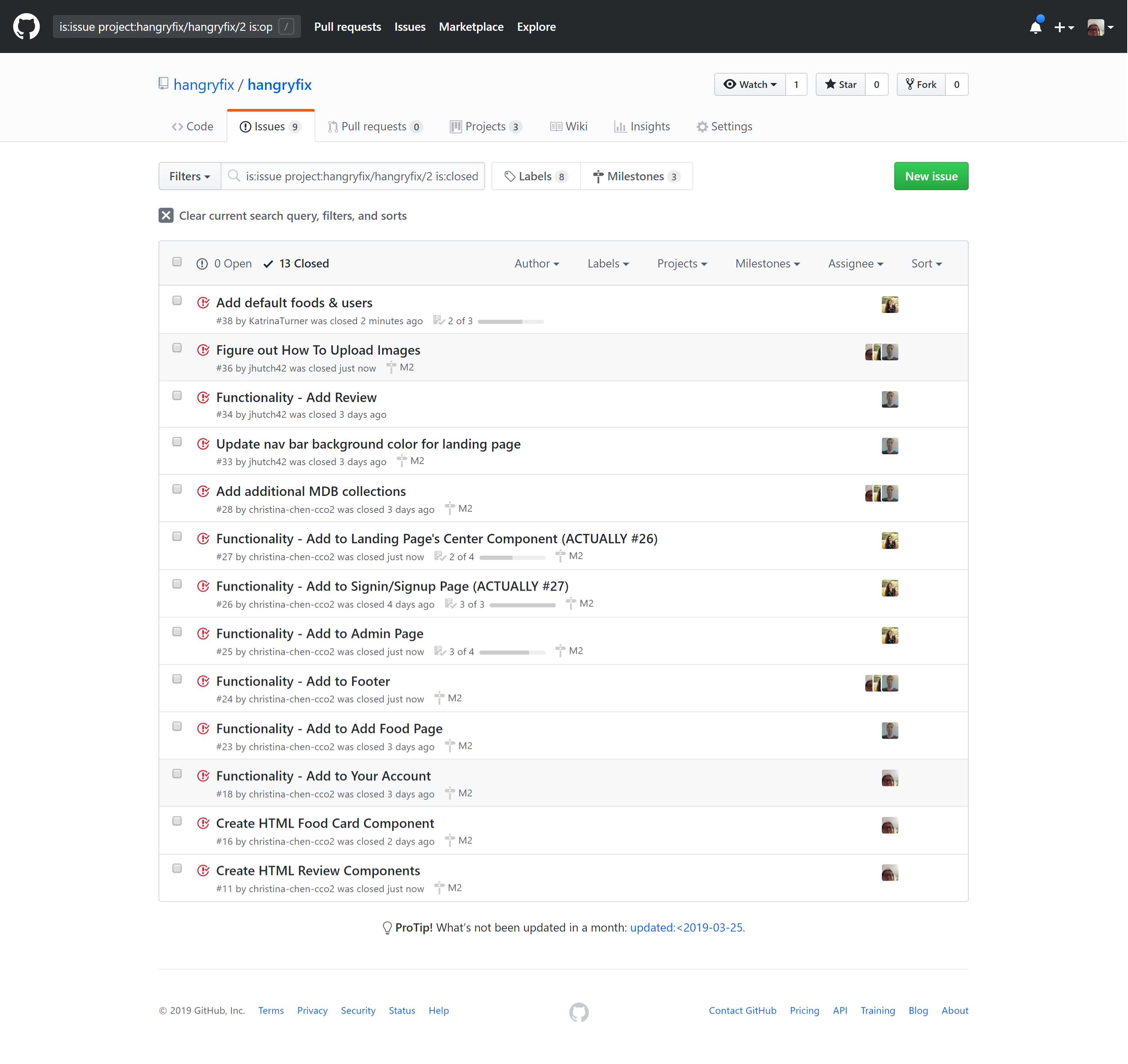 Milestone 2 consisted of 13 issues, each of which were implemented in their own branches that were later merged into the master. Progress was managed via the hangryFIX GitHub Project M2: 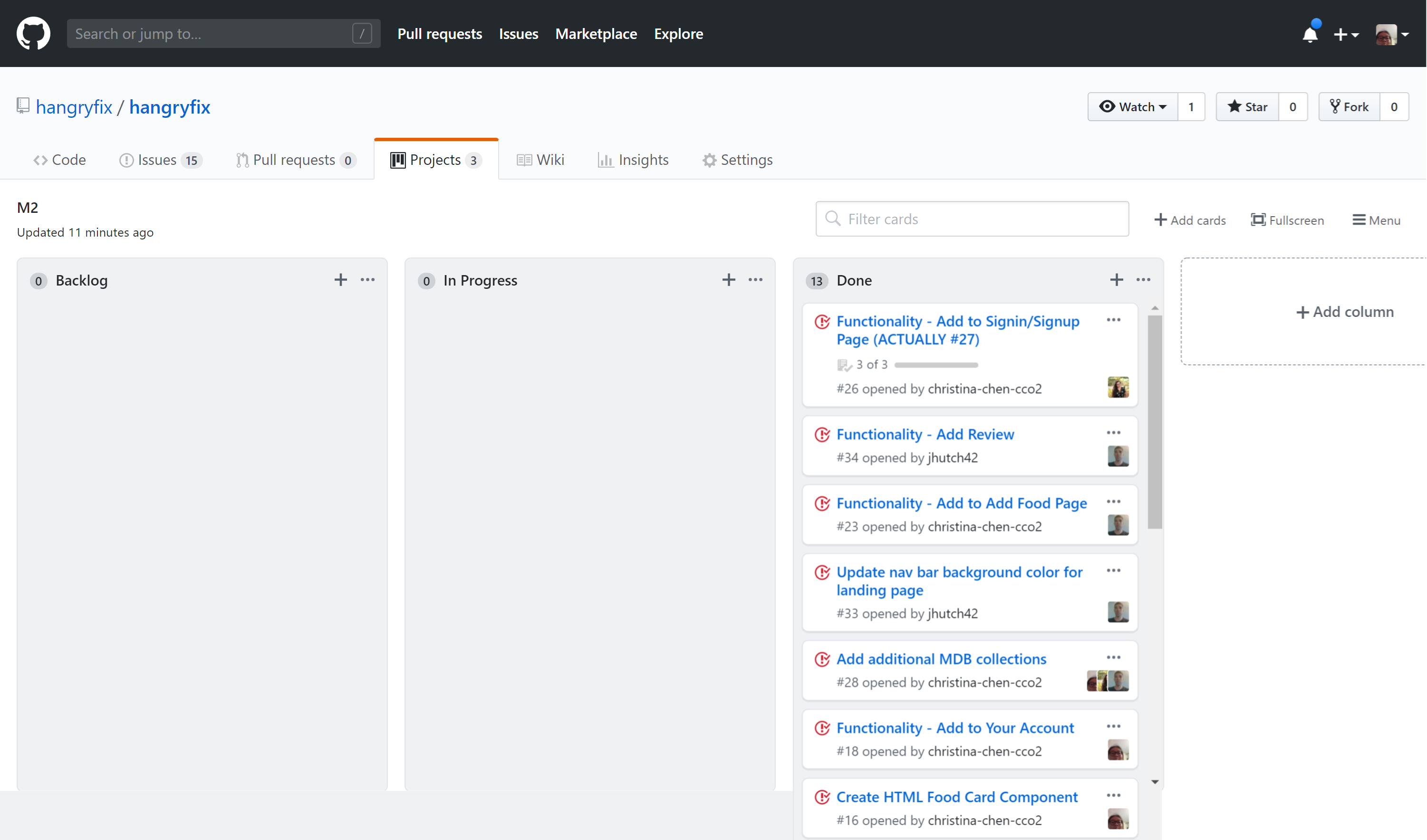 This milestone started on April 25, 2019 and ended on May 6, 2019. The goal of Milestone 3 was to continue and finish adding the functionality needed for this application. The major additions and/or changes made were working filters to the search page and the users' account pages, the feature for users to view all their reviews they made on their account pages, and icons for searching foods in each food category on the landing page. The building of the application wrapped up in this milestone with a few clean-ups of the overall layout of all the pages. 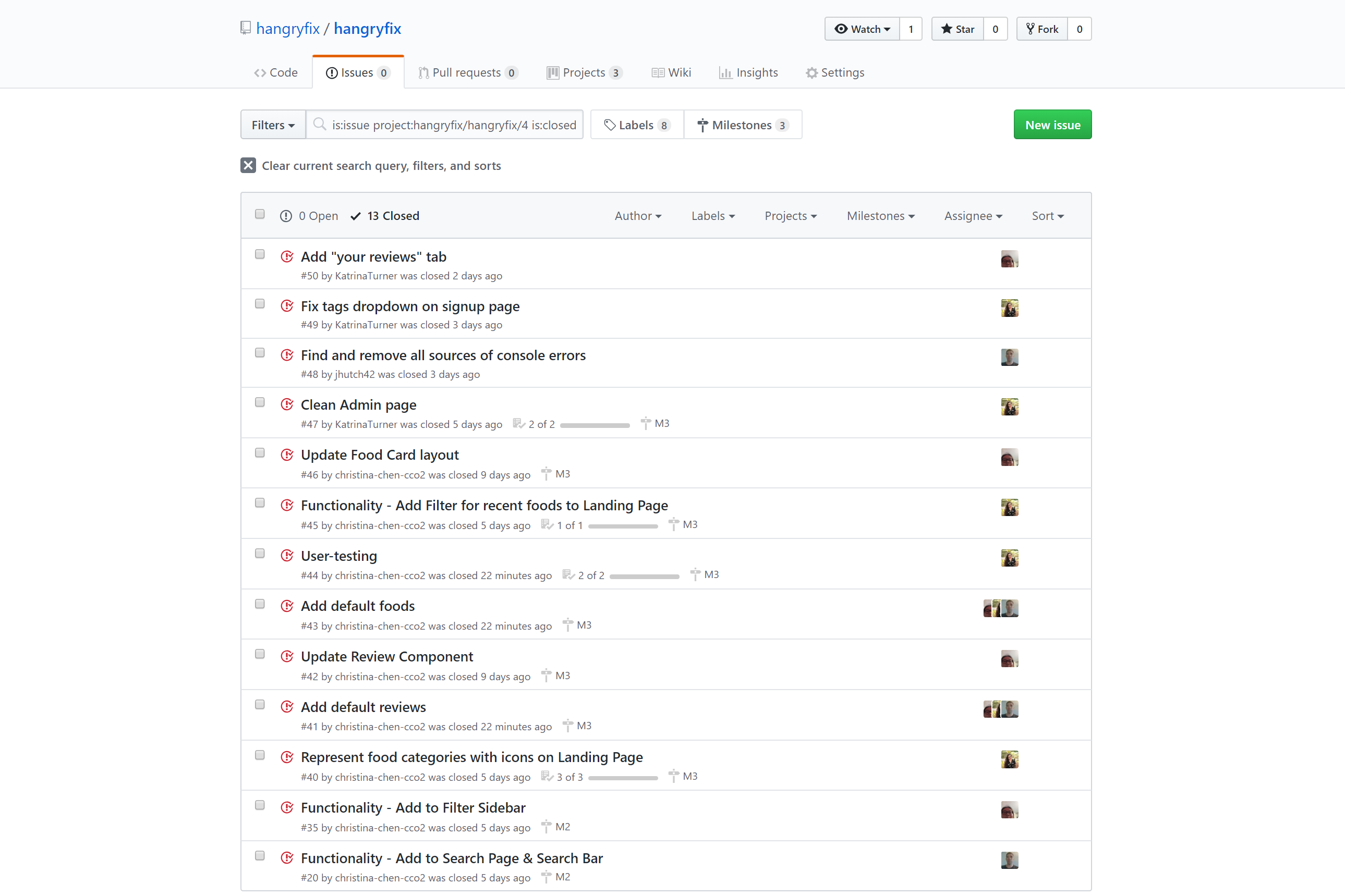 Milestone 3 consisted of 13 issues, each of which were implemented in their own branches that were later merged into the master. Progress was managed via the hangryFIX GitHub Project M3: 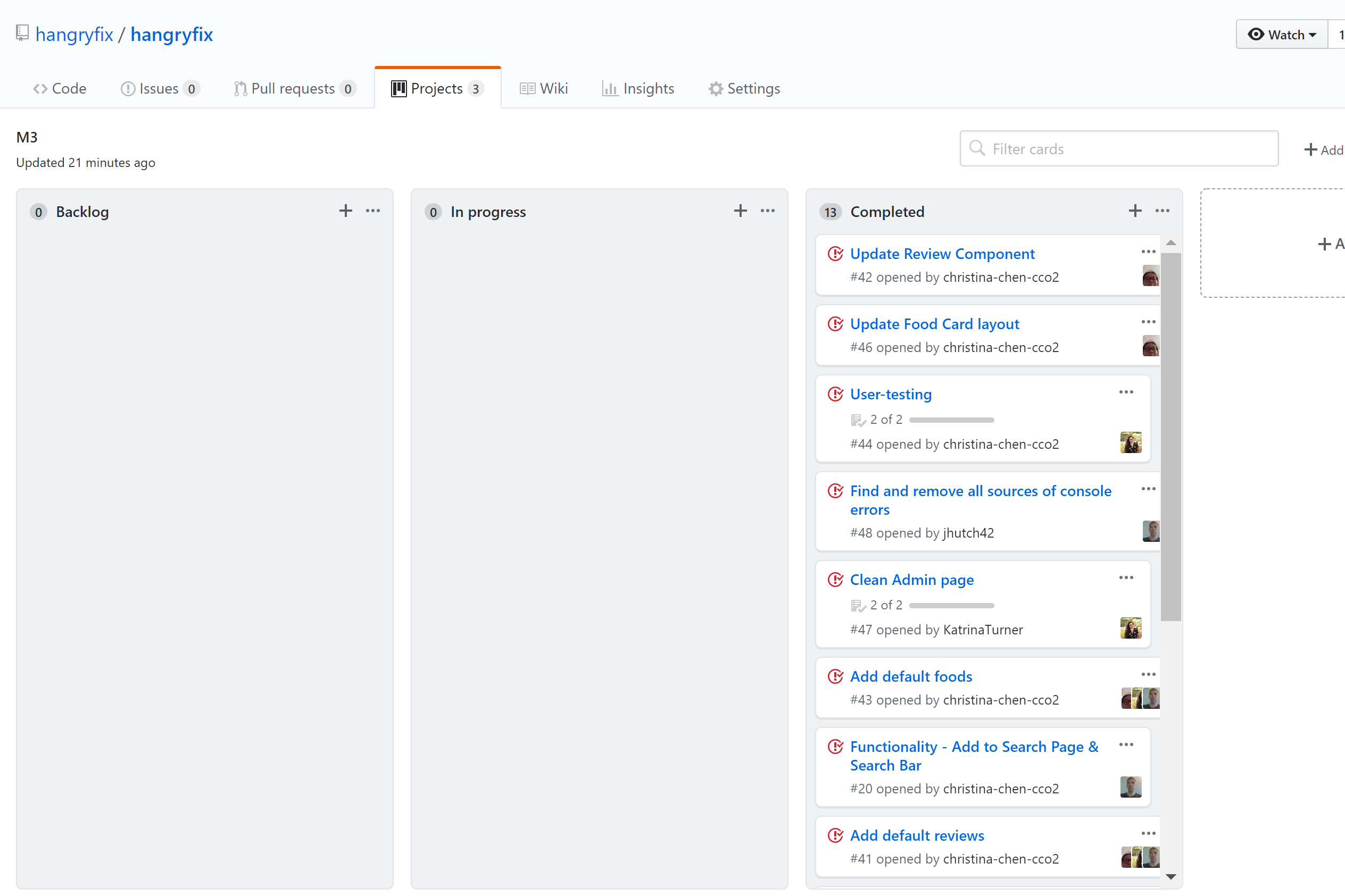 We took 5 members of the UH community and asked them to make accounts to test out the prototype of our app. Overall we got fairly positive responses. Here are some screenshots of the anonymous post survey we gave them. 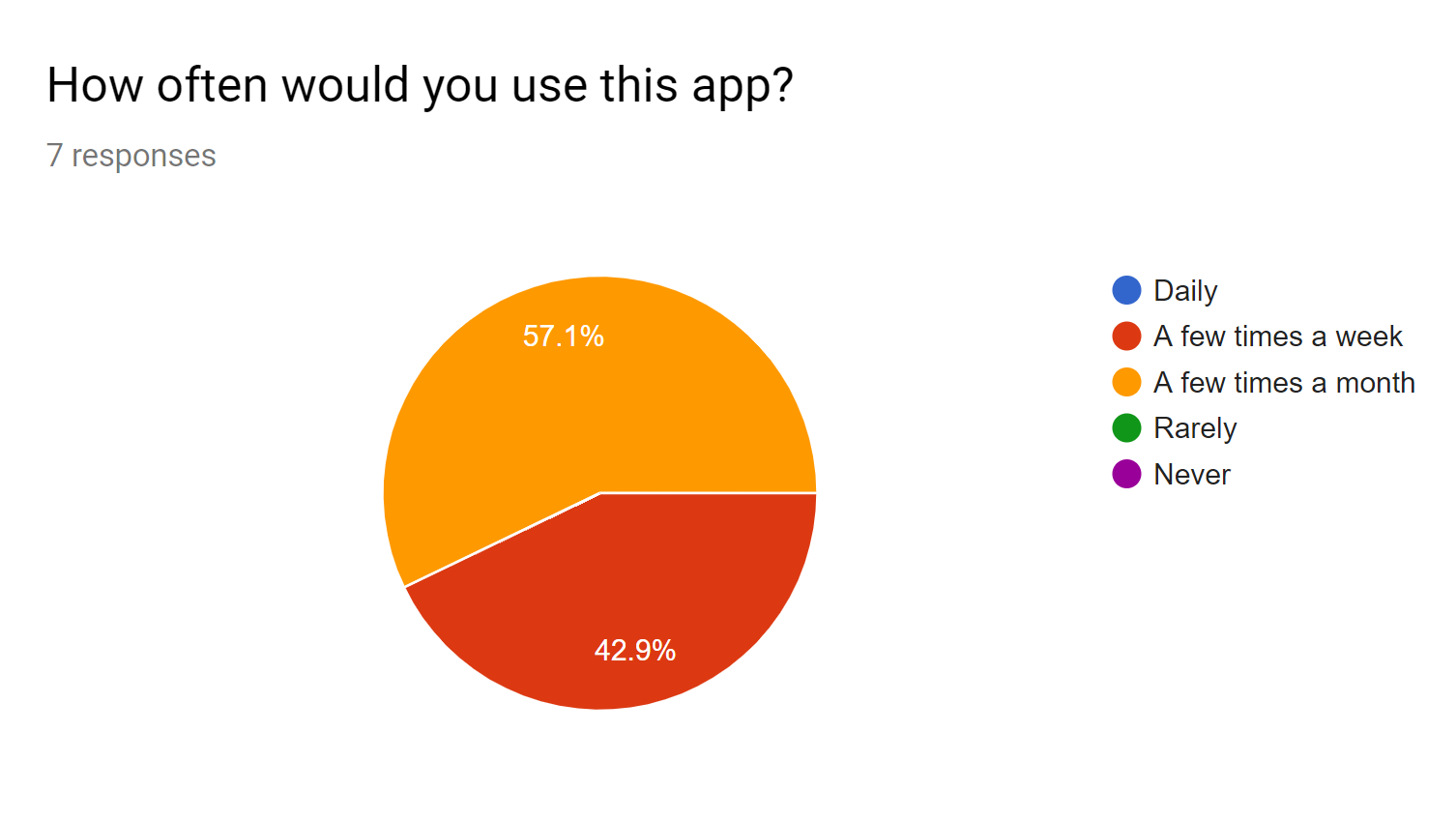 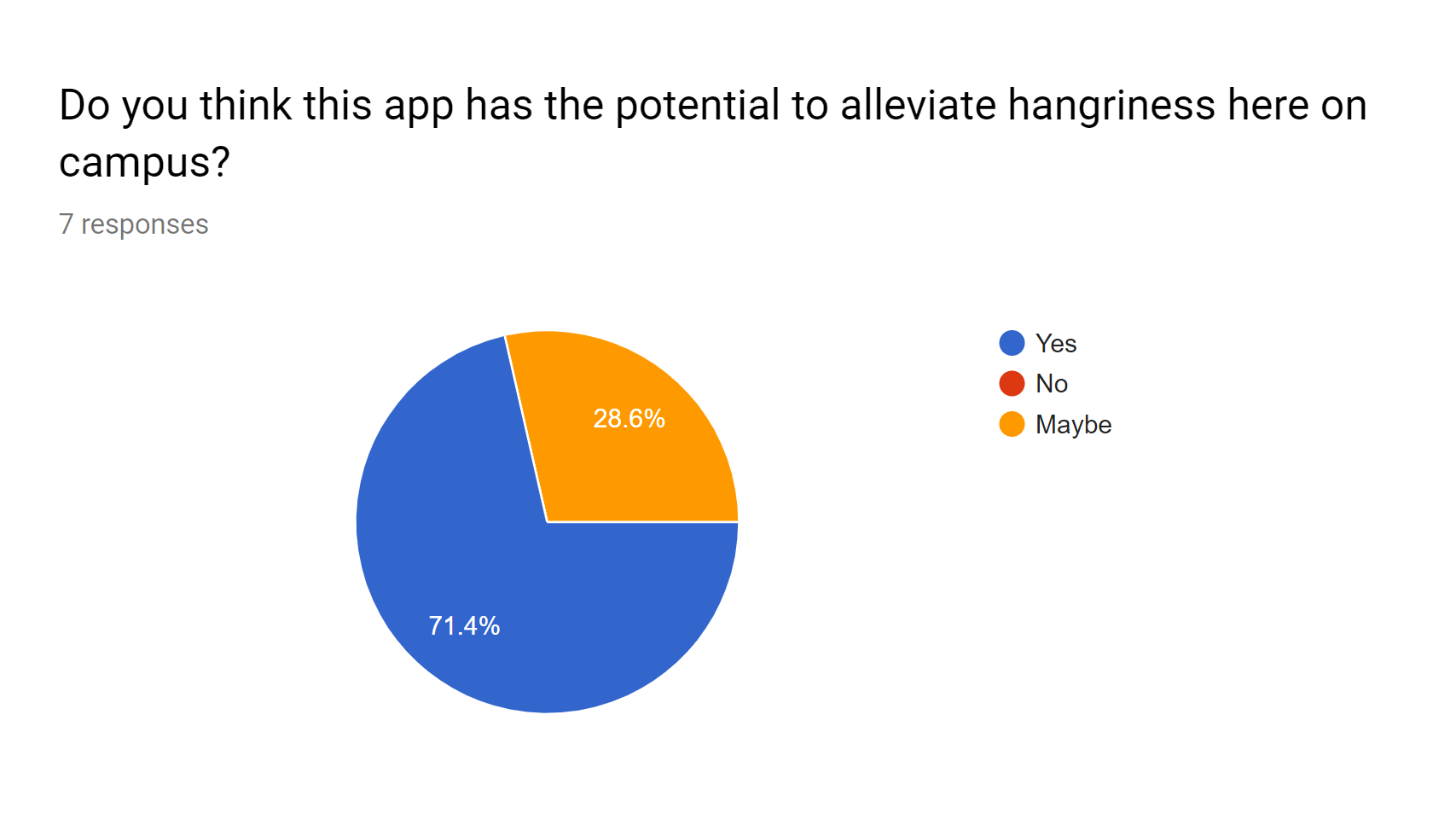 All respondents said they would use the app a few times a week to a few times a month and most of them said the app has the potential to alleviate hangriness on our campus.

Here are some of the pros and cons listed by our community members. 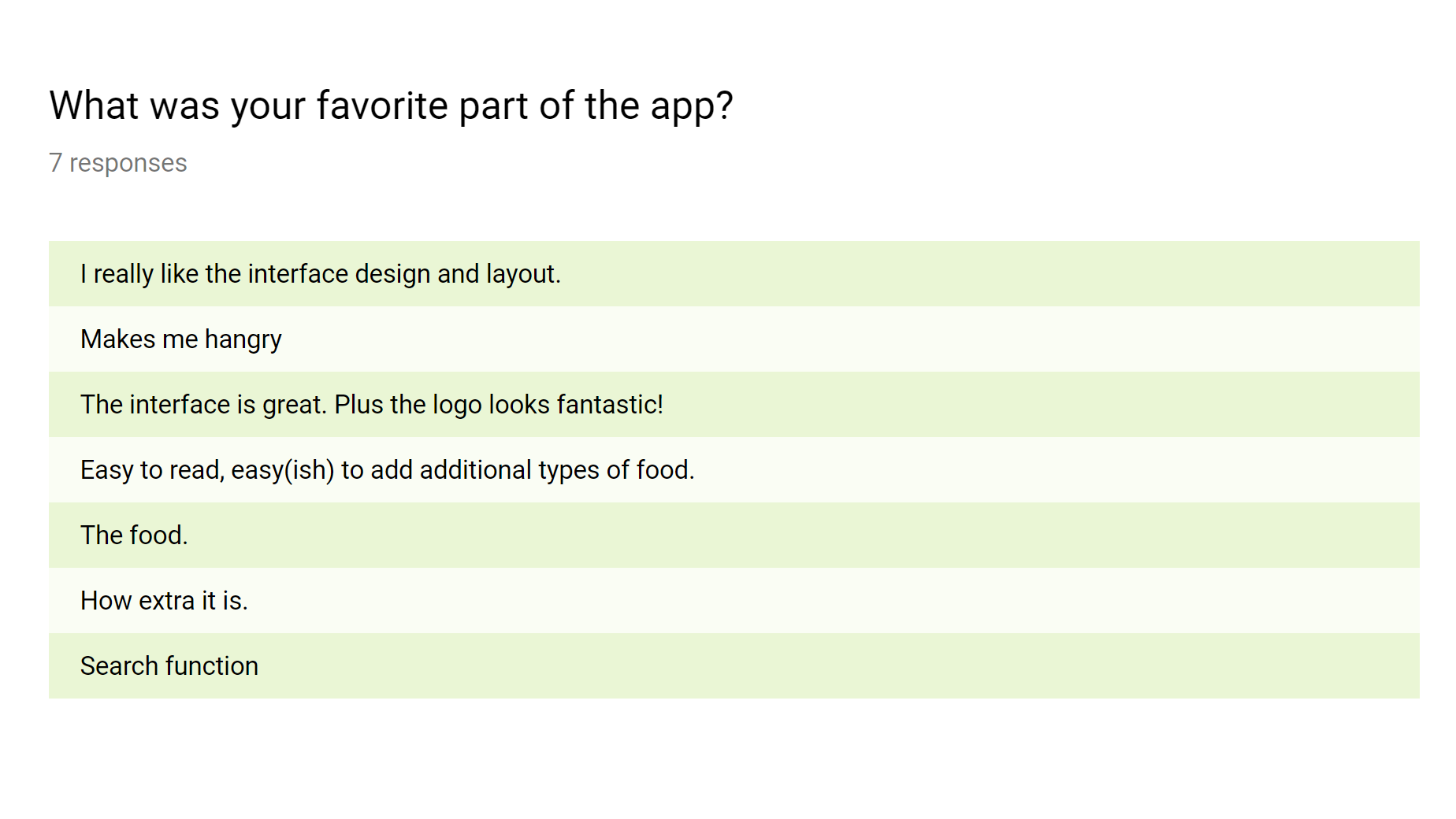 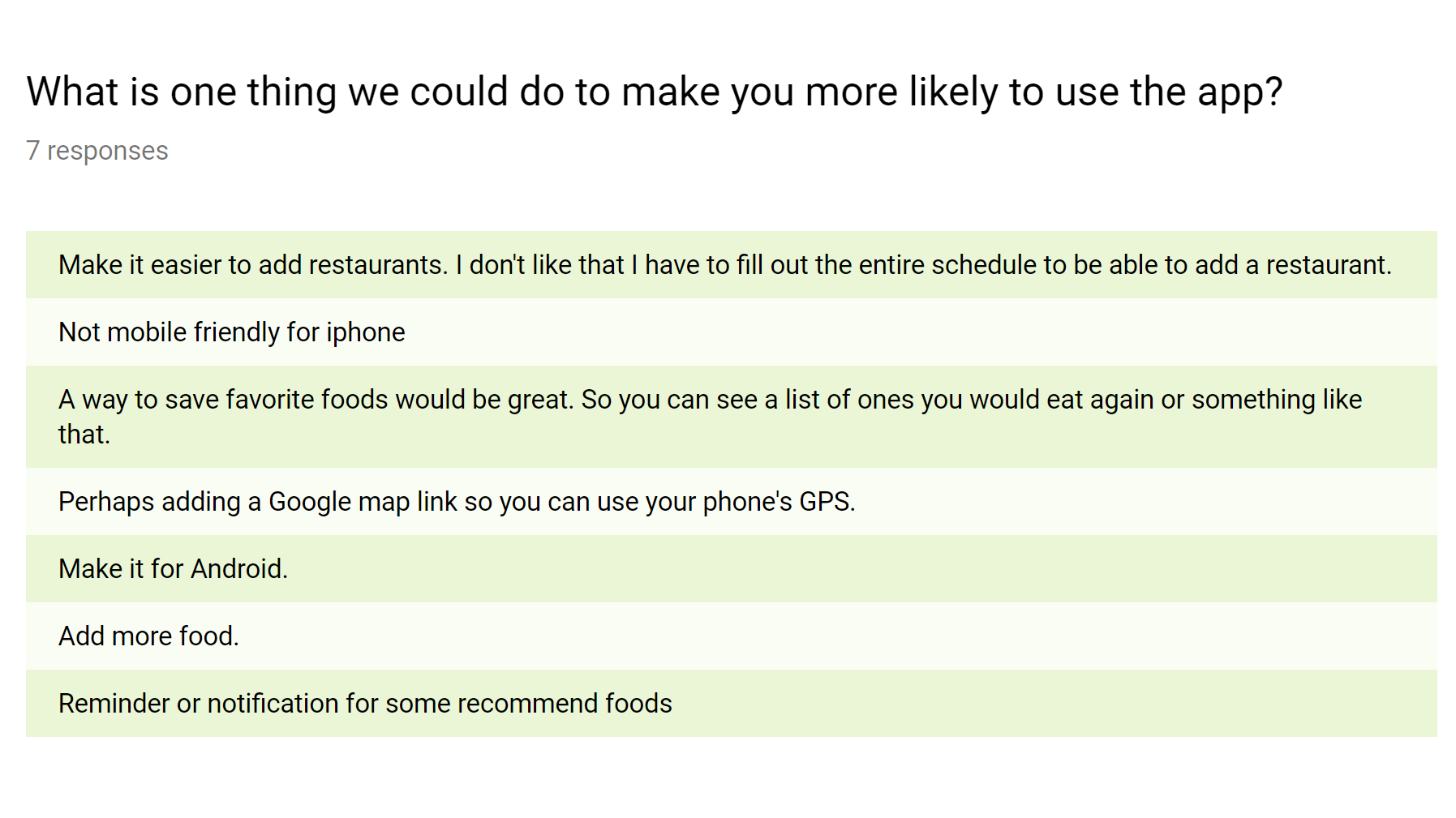 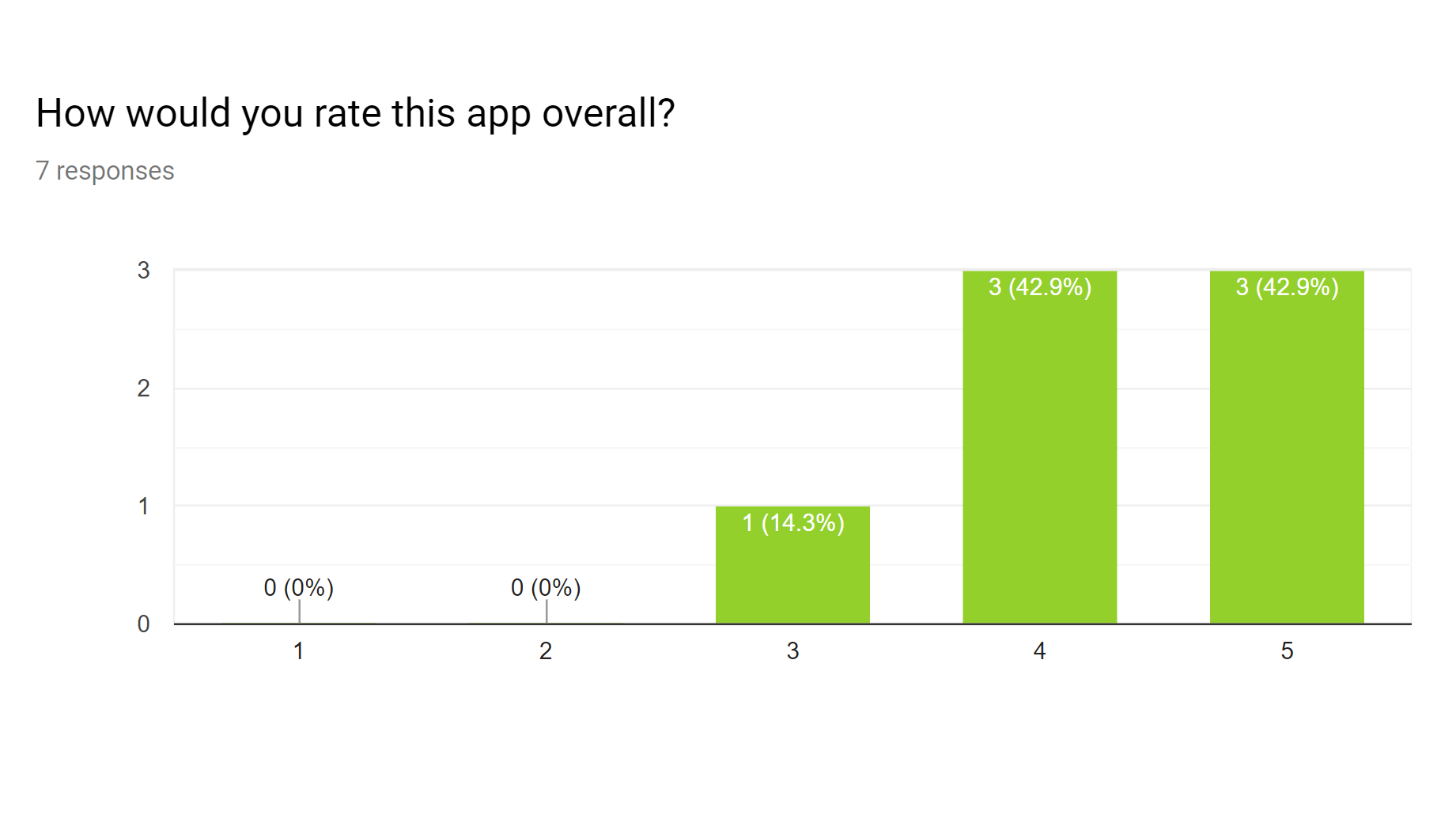